Birds and bees talk must begin at home | Inquirer News

Birds and bees talk must begin at home 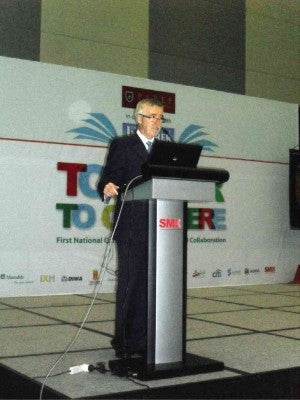 Parents should be the first to teach their children about sexuality, an education expert said.

“Parents have to get in first,” said Dr. Andrew Mullins, headmaster of Wollemi College in Sydney, Australia, and author of “Parenting for Character.”

He said it was “very important for parents … to impart to their children sex education because the messages [from] other parties cannot reflect the commitment and love in the family.”

Education Secretary Armin Luistro, who gave the opening remarks, said parents could not simply “pass on the blame to teachers” whenever a school failed to discipline their children.

At the first national congress on home and school collaboration organized by the Parents for Education Foundation (Paref), Mullins said parents should show by example and words that sexuality and relationships are about “loving commitments in the family.”

He said it would be confusing for a child to get the message outside of the home.

“It’s your privilege to have this most wonderful discussion with your child,” he told an audience of parents, teachers and administrators from different schools across the country.

Asked how parents should discuss sexuality with their kids, Mullins said it should not be “in one big conversation.” Rather, it should be in “ongoing, loving, personal conversations with a child.”

As for integrating sex education into the school curriculum, Mullins said what most schools could do was to “give the biology” but parents should talk to their children first.

Otherwise, he said, a child might get the impression that sex education was all about biology when “it’s much more than that.”

He noted that in most countries, sex education was left entirely to the school. But in Australia, he said the best programs always involved parents who were encouraged to talk to their children first.

The congress, with the theme “Together to get there,” aimed to build character education in the home and in the classroom, as well as to strengthen collaboration between home and school.

Mullins warned his audience of the “tsunami of secular influences” from the West that was spreading throughout the world and could result in the “degeneration of the family and of the moral fiber.”

He said, “Your country has not suffered yet that tsunami … but it’s coming.”

Mullins said nobody, except parents, had the right to set the moral agenda for a child’s upbringing. The job of the school was to “support the values of parents.”

“Schools can and should help with parenting support,” he said. “If families don’t succeed in values education, there can be no effective substitute.”

“A family and a school should be sheltered environments,” he said. “We are buying time to build strengths of character so the kids will be in a position to run their own lives, think for themselves and avoid most of the bear pits on the way to adulthood.”

He said society should cry out for children corrupted by a media or peer group  out of reach of parents.

In his remarks, Luistro cited Article II Section 12 of the Philippine Constitution emphasizing the role of parents in the upbringing and moral development of their kids, which should receive support from the government.

Stressing that no one could take the place of parents, Luistro said, “I hope your gathering … will allow the Philippines to really present a model for a parent-teacher collaboration that works.”

At the end of the conference, participants led by Paref chair Jose Sandejas unanimously adopted a resolution, which read in part that “the association of parents, teachers, school administrators and the national, regional and division offices [will] enable the continuing formation of educators in their respective responsibilities in the child’s education in character.”