VANCOUVER, British Columbia — It seems that Toronto Mayor Rob Ford can’t cross the street these days without getting into trouble. 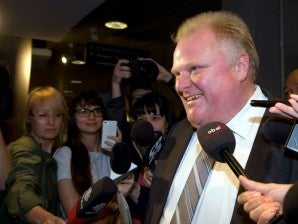 Ford was in Vancouver, British Columbia, where he’s attending the funeral of a friend’s mother.

Toronto’s embattled mayor last year made international headlines when he admitted to having smoked crack cocaine while in a drunken stupor.

He’s drawn attention in recent months for erratic behavior, but he has resisted pressure to step down and plans to run for reelection late this year.