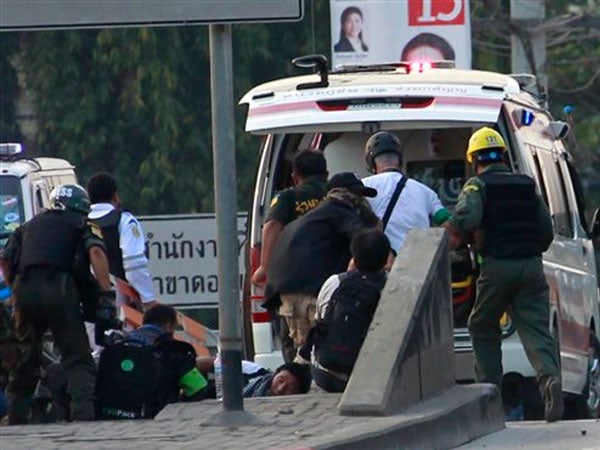 US journalist James Nachtwey, second right in white shirt, is taken to an ambulance after he received a minor injury following clashes between anti and pro-government groups in Bangkok, Thailand Saturday, Feb. 1, 2014. AP

WASHINGTON – Acclaimed US photographer James Nachtwey was shot in the leg but not badly hurt in pre-election clashes in Bangkok Saturday, his long-time employer Time magazine said.

“The bullet passed through but didn’t hit the bone,” said Kira Pollack, the publication’s director of photography.

“Amazingly, he went right back out and started working again,” Pollack – who was in touch with Nachtwey via text message – said in a story on Time’s website.

Tensions flared in the Thai capital ahead of controversial snap elections Sunday, with explosions and heavy gunfire erupting as pro- and anti-government protesters faced off on the city’s streets.

Nachtwey – who has won numerous awards for his reporting from conflict zones around the world – has been a contract photographer with Time Magazine since 1984.

However, he was not on assignment for Time when he was shot, according to the publication.

A photo tweeted by Thapanee Ietsrichai, whose profile says he is a reporter for Channel 3 Thailand, showed what appeared to be Nachtwey standing up as one of his legs was bandaged.

The Wall Street Journal’s Southeast Asia Real Time blog quoted Nachtwey as saying it was unclear who shot him and that he later went to a hospital to get the injury examined.

“I consider myself extremely lucky,” he told the Journal.

US Ambassador to the United Nations Samantha Power tweeted that her thoughts were with the “living legend.”

“Will always be a career & life highlight to have worked with Nachtwey,” she tweeted. “He could always see what the rest of us cldn’t-Nobody is invisible to Jim.”

Opposition demonstrators have vowed to block Sunday’s poll as they seek to prevent the likely re-election of Prime Minister Yingluck Shinawatra.