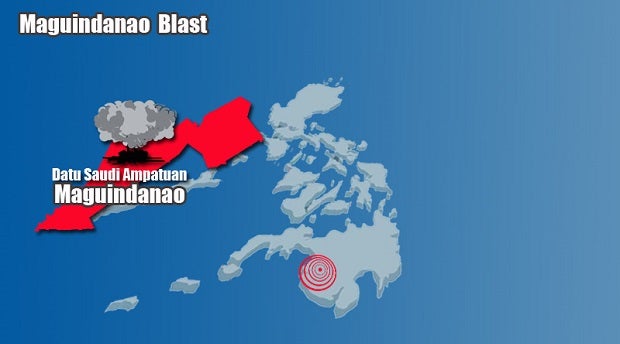 COTABATO CITY, Philippines—Twelve people, including two journalists from Manila, were injured in two explosions in Maguindanao province on Saturday as thousands of civilians displaced by nearly a week of clashes between government forces and hardline Moro rebels appealed to both sides to cease fighting.

A reporter and a cameraman from TV5 were among at least six civilians hurt by an improvised explosive device that exploded in Saudi Ampatuan town, Maguindanao, Maj. Gen. Romeo Gapuz, commander of the Philippine Army’s 6th Infantry Division, said.

Six soldiers were also wounded in the explosion, Gapuz said.

Gapuz said the soldiers were on a security patrol and were traveling on the highway at 6:30 a.m. when a roadside bomb exploded, flattening the tires of their armored personnel carrier.

No one was injured in the blast.

Journalists, who followed the soldiers in two other armored vehicles, were reporting from the site when a second roadside bomb went off, Gapuz said.

He said the blast injured TV5 reporter Jeff Caparas, his cameraman, Adrian Bulatao, four other civilians who had been following the military convoy in a tricycle and six soldiers.

“The second bomb prematurely exploded and they were hit by shrapnels along with our soldiers,” Gapuz said.

The head of TV5’s news division, Luchi Cruz-Valdez, said Bulatao’s injury was “serious,” with shrapnel wounds in his right side.

“Bulatao is in shock but conscious, in pain,” Valdez said in an SMS message.

Caparas was still on his feet despite his injury, she added.

Gapuz said three military helicopters picked up the injured and transported them to a hospital here.

“They are now safe,” he added.

TV5 said in a statement that the journalists would be flown back to Manila.

On Friday, the military said three of the slain rebels were child soldiers, who were buried along with the others in rites following Muslim tradition.

Malacañang on Saturday condemned the BIFF’s use of child soldiers, calling it a violation of international laws.

Col. Dickson Hermoso, spokesperson for the Philippine Army’s 6th Infantry Division, said the military found a black flag similar to that of the international terror group al-Qaida at one site of the clashes in Datu Piang town earlier last week.

Hermoso said the flag tended to support intelligence reports that al-Qaida fighters were aiding the BIFF.

Brig. Gen. Eduardo Pangilinan, commander of the Army’s 601st Infantry Brigade, on Friday identified one of the al-Qaida fighters as Malaysian Zulkifli bin Hir, who has a price of $5 million on his head for the 2002 bombing of two nightclubs on the Indonesian resort island of Bali that killed 110 people, mostly Australian tourists.

Hermoso said the reported presence of Zulkifli and other foreign fighters in BIFF camps was under investigation.

The explosions on Saturday came three days after government troops captured a BIFF stronghold where the rebels made bombs and trained fighters.

The bombs are typically fashioned from unexploded mortars and rocket-propelled grenades triggered remotely by cell phones.

“That is their signature based on what we have recovered from their camp,” Hermoso said.

“They just set off bombs in civilian communities and it doesn’t matter to them who gets hit, and this is an example,” Hermoso said, referring to Saturday’s explosions that injured the two journalists and other civilians.

Abu Misri Mama, a spokesperson for the BIFF, said Saturday’s explosions were landmine attacks and three soldiers were killed.

“We do not want to harm members of the press,” Mama said, adding that military convoys were legitimate targets for the BIFF.

“They should know that there is an ongoing war and that military targets are legitimate targets. They should refrain from joining military convoys or riding in military vehicles,” Mama said.

The Mindanao Human Rights Action Center (Minhrac) said Saturday’s explosions came just as thousands of evacuees thought they would have a respite from the violence that had sent them fleeing their homes in several towns in Maguindanao in the past six days.

The military had said it was looking to wrap up the operations against the BIFF by Saturday, but the explosions were an indication that the rebels, whose capability to inflict harm on troops and civilians the Army wanted to degrade, could still fight.

In a statement, Minhrac said the evacuees were calling on the military and the BIFF to cease fighting, as the prolonged violence was hurting their livelihood, threatening their safety and taking a toll on them psychologically.

The human rights monitoring group said residents of the villages where the military was pounding the BIFF with artillery fire and aerial strikes had become restive.

The Autonomous Region in Muslim Mindanao (ARMM) government on Saturday gave assurance that it had enough funds to provide for the emergency needs of the evacuees.

According to the ARMM social welfare office, the fighting has displaced some 10,000 residents of Raja Buayan, Sultan sa Barongis, Datu Piang and Datu Saidona Mustapha towns.

ARMM Executive Secretary Laisa Masuhud-Alamia said several villages had become ghost towns, with entire populations fleeing to distant but safe areas where they were getting assistance from the regional government.

Alamia said the ARMM government had P47 million in assistance funds and adequate relief supplies to handle the needs of the evacuees.

ARMM Gov. Mujiv Hataman said that should the situation turn for the worse, his “special purpose” fund of about P280 million could be used to help the evacuees.

“Our concern at the moment is not lack of funds but how to end the hostilities in Maguindanao,” Hataman said. With a report from AFP