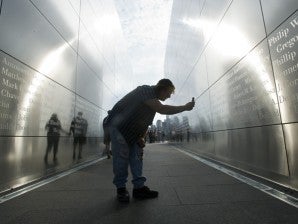 ‘EMPTY SKY’. Dave DiMascio of North Arlington takes a photograph of a name on the Empty Sky memorial in Liberty State Park Sunday Sept. 11, 2011 in Jersey City, N.J. When he was younger, he worked as a messenger in the area around the World Trade Centers and spent time Sunday reflecting on the attacks ten years ago. (AP Photo/Joe Epstein)

New York—Americans on Sunday remembered the horror of Sept. 11, 2001, and the nearly 3,000 people who died in the hijacked plane attacks as authorities worked to ensure the emotional 10th anniversary was peaceful.

Law enforcement authorities in New York and Washington were on high alert against what was described as a “credible but unconfirmed” threat of an al-Qaida plot to attack the United States again a decade after the toppling of the World Trade Center’s Twin Towers by hijacked airliners.

Security was especially tight in Manhattan, where police set up vehicle checks on city streets as well as bridges and tunnels coming into the city.

US President Barack Obama and former President George W. Bush, who was the US leader at the time of the attacks, were among the dignitaries at the Ground Zero site in New York.

They joined the victims’ families to hear the reading of the names of those who died on Sept. 11. Bells tolled across the city.

In the attacks, 19 men from the Islamic militant group al-Qaida hijacked airliners and crashed them into the World Trade Center, the Pentagon outside Washington and a field in Shanksville, Pennsylvania.

To mark the attacks, Obama was set to visit all three sites.

“Thanks to the tireless efforts of our military personnel and our intelligence, law enforcement and homeland security professionals, there should be no doubt: today, America is stronger and al-Qaida is on the path to defeat,” Obama said in his weekly radio and Internet address.

Sunday’s Ground Zero ceremony included moments of silence marking when planes hit the Twin Towers as well as when they collapsed.

Other moments of silence marked the times when a plane hit the Pentagon and another crashed in Shanksville after passengers fought back against the hijackers.

Bush, who has kept a low profile since leaving office, was in Shanksville on Saturday. “The memory of that morning is fresh, and so is the pain,” Bush told a crowd at the site.

New Jersey Gov. Chris Christie spoke on Saturday at the opening of a monument to the 746 residents of his state killed in the attacks.

The Empty Sky memorial in Liberty State Park, across the Hudson River from the World Trade Center, has the names of the dead etched on two 9-meter-tall walls, each 63.7 meters long—the exact width of the Twin Towers.

“Their lives mattered,” Christie said at the ceremony, which began late because security slowed traffic. “That’s why we built this memorial and that’s why we come here today.”

Security concerns were high in Washington, too. Authorities shut down part of Dulles International Airport in northern Virginia outside the US capital on Saturday because of a suspicious object but later said no explosives were found.

New Yorkers, accustomed to heightened security and alerts that have become commonplace over the past decade, appeared to take the increased police presence in stride.

A decade later, after a faltering start, there are signs of rebuilding progress at the World Trade Center site. The new One World Trade Center skyscraper rises more than 80 stories above the ground as it inches to its planned 541-meter height—equivalent to 1,776 ft, symbolic of the year of America’s independence from Britain.

The memorial plaza is ready and the neighborhood has enjoyed a revival, making it a trendy Manhattan place to live.

The 2001 attacks were followed by US-led wars in Afghanistan and Iraq, the latter of which Obama opposed. The United States still has thousands of troops deployed in both countries.

But the weak US economy has become the biggest concern for many Americans. Obama said, “After a hard decade of war, it is time for nation building here at home.”

Much of the weight of this year’s ceremonies lies in what will largely go unspoken. There’s the anniversary’s role in prompting Americans to consider how the attacks affected them and the larger world and the continuing struggle to understand 9/11’s place in the lore of the nation.

“A lot’s going on in the background,” said Ken Foote, author of “Shadowed Ground: America’s Landscapes of Violence and Tragedy,” examining the role that veneration of sites of death and disaster plays in modern life.

On Saturday in rural western Pennsylvania, more than 4,000 people began to tell the story again.

At the dedication of the Flight 93 National Memorial near the town of Shanksville, Bush, former President Bill Clinton and Vice President Joe Biden joined the families of the 40 passengers and crew aboard the jet who fought back against their hijackers.

“The moment America’s democracy was under attack our citizens defied their captors by holding a vote,” Bush said. Their choice cost them their lives.

The passengers and crew gave “the entire country an incalculable gift: They saved the Capitol from attack,” an untold amount of lives and denied al-Qaida the symbolic victory of “smashing the center of American government,” Clinton said.

They were “ordinary people given no time at all to decide and they did the right thing,” he said. “And 2,500 years from now, I hope and pray to God that people will still remember this.”

The Pennsylvania memorial park is years from completion. But the dedication and a service to mark the 10th anniversary of the attacks are critical milestones, said Sally Ware, one of the volunteer “ambassadors” who has worked as a guide at the site since the disaster.

The ceremonies honor those who “fought the first battle against terrorism—and they won,” Ware said. “It’s something I don’t want to miss. It’s become a part of my life.” With reports from Reuters

Read Next
Cables show how US intervened in the Philippines
EDITORS' PICK
Smart celebrates all kinds of ‘#SimplyLove’ for Pride Month
WATCH: INQside Look with Fil-Am actress Aina Dumlao
SWS: Over 12M Filipinos still jobless as of May 2021
SANTIS Delicatessen: The road to survival is sweet and savory
Smart brings KCON:TACT especially 4U to subscribers from June 19 to 27
Dizon: 40 of 119 ‘Build’ projects done by 2022
MOST READ
William Martinez sometimes feels his kids ‘don’t remember’ him anymore
De La Hoya warns Spence: Be careful of Pacquiao
Mayor vs mining ‘guilty of oppression’
DOTr expects SMC’s P735-B airport project to break ground within next 60 days
Don't miss out on the latest news and information.