The shadowy world of sex trafficking on US shores 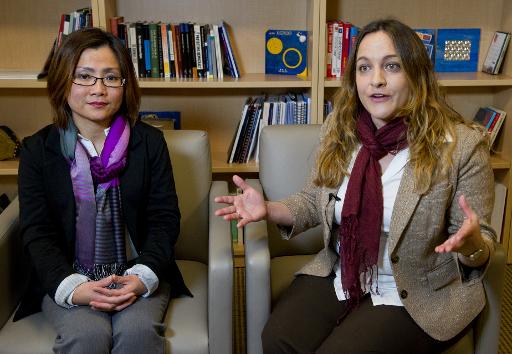 Shandra Woworuntu (L), human trafficking survivor and activist, and Melysa Sperber, director of the Alliance to End Slavery and Trafficking, speak during an interview with AFP, at Humanity United in Washington, DC, on January 28, 2014 (AFP/File, Karen Bleier)

WASHINGTON— “Are you Shandra? Yes, I am.”

With those few words, a young Indonesian with big dreams of a better life found herself catapulted into the murky underground world of sex slavery and violence.

But Shandra Woworuntu, then 25, was not trapped in a sordid brothel plying clients in some far-flung Asian tourist hotspot.

Instead the college graduate and young mother was whisked away from New York’s busy John F. Kennedy airport with a gun to her head by an organized gang working in the heart of the world’s economic superpower.

Nothing had prepared the slight, softly spoken, shy woman to become one of the thousands of men, women and children lured into the hidden world of sex trafficking and forced labor in the United States every year.

After losing her job as a financial analyst in a bank in the chaos unleashed by Asia’s economic crisis, Shandra replied to a newspaper ad for temporary work in a hotel in Chicago.

In 2001, having passed a test, and armed with a visa from the US embassy, she left her young daughter, promising to return home soon.

“I was excited — I thought this was the American dream. I will earn some money and I will go back after six months,” she told AFP.

But on her very first night on US soil, she was put to work in a New York brothel, before being passed from pimp to pimp — a Malaysian known as Johnnie Wong, a Taiwanese guy, a man who only spoke Cantonese, and even an American.

“They put a gun on my head, and I just think I have to save my life,” she said in somewhat broken English, her voice at times dropping to a whisper.

“Maybe I have been kidnapped, I didn’t know exactly. What I need to do is life survival.”

Many of the girls and women she encountered working in the brothels had also been lured from abroad, some from her native Indonesia. She was the oldest of the group. Most were just teenagers.

One young girl, whose age she guessed at as between 10 to 12, did not speak any language Shandra recognized. “I never knew where she came from,” she said sadly.

She was forced to work through the night in casinos and hotels where clients would pick from the girls lined up in front of them or would telephone for services.

“The phone was always ringing,” remembered Shandra, who said the women were often denied food, but were presented with tables laden with alcohol and drugs.

Moved many times in vans with tinted glass and held in rooms with shuttered windows, and barred by beefy bodyguards, Shandra lost all notion of time. And she was told that she had to work to repay a $30,000 “recruitment fee.”

To this day, she can’t say how long she endured captivity, knowing only she arrived in spring and it was turning cold that same year when she escaped.

“This is not the job that they promised,” she said, without a hint of irony.

An open bathroom window, two floors up, gave her her chance. Persuading one other girl to go with her, they jumped, and miraculously survived unscathed.

After weeks of living rough, with the police, church, and the FBI all refusing to believe her story — and even falling into the hands of another pimp — Shandra, whose passport and all documents had been stripped from her on day one, finally found help with a victim’s agency called Safe Horizon.

While her tale might sound incredible, agencies say it is very common.

And it doesn’t just concern foreigners — young American runaways all too often put themselves in dangerous situations wooed by tales of modeling careers and lucrative music contracts.

The Alliance To End Slavery and Trafficking estimates about 14,000 to 17,000 men, women and children are smuggled illegally into the US every year to work in the sex trade or in factories, farms and bars as forced labor.

“This is organized crime and they are very organized. And what we see is that they are increasingly more sophisticated in how they are committing this crime,” said the alliance’s director, Melysa Sperber.

The group is calling for greater government controls on the recruiters who lure vulnerable people to US shores every year.

In its 2013 global Trafficking in Persons report, the State Department recognized that the United States is “a source, transit, and destination country for men, women, and children — both US citizens and foreign nationals — subjected to forced labor, debt bondage, involuntary servitude, and sex trafficking” with victims mainly coming from Mexico, Thailand, the Philippines, Honduras and Indonesia.

While prosecutions by federal agencies were on the rise due to greater awareness of the problem, the report recommended that funding should be increased to agencies providing victim services, and there should be greater oversight on contractors hiring foreign laborers.

Legislation is now pending in the House of Representatives sponsored by congressman Ed Royce seeking to close such loopholes, such as requiring foreign hirers to be registered with the Labor Department.

It would also ensure foreign labor contractors would have to provide the names of the employers and recruiters and a signed contract.

The bill “provides the tools needed to avoid the scams of unscrupulous labor recruiters who force workers into slave labor or sexual slavery once they enter the US,” Royce said when he introduced the bill in October.

“The human cost of trafficking is painfully high — we must act.”

Although still emotionally scarred by her past, Shandra, who helped law enforcement agents bust at least one of the networks which brutalized her, is now proudly putting her experiences to use to try to fight human trafficking.

“If I don’t stand for them who live in the shadows, become a voice of the voiceless… the government, the community will not know that it’s happening,” she told AFP.

“I hope I can do more to help them identify the victims … because I believe with my connection, with all of us together, we will fight modern-day slavery.”