Is ‘Intsik’ a racial slur? Chinese-Filipino prof in US says it’s not | Inquirer News

Is ‘Intsik’ a racial slur? Chinese-Filipino prof in US says it’s not 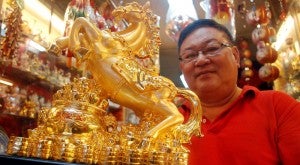 BAGUIO CITY, Philippines—It is not odd that “Intsik” (Chinese) is still part of the Filipino’s vocabulary because the presence of Chinese in the Philippines and their influence on Filipino culture remain strong.

President Aquino is a Filipino of Chinese descent, as his late mother, former President Corazon Aquino, was a member of the influential Chinese-Filipino Cojuangco clan.

Filipinos heed the preaching of religious leaders of Chinese origins like the late Jaime Cardinal Sin, and are inspired by the rags-to-riches stories of the country’s taipans, among them Henry Sy whose Chinese ancestry is not in dispute.

Some Chinese-Filipinos in Baguio City bristle every time they hear the word Intsik.

But not hotel owner Peter Ng. A former taxicab driver who saved up, invested, built and operate Hotel Supreme here. Ng said he had realized that Intsik was not a racial slur.

“I don’t get offended. I am used to it. I am Intsik, after all. But more important, I am Filipino,” Ng told author Richard Chu, a Filipino scholar who lives in the United States.

Chu, an associate professor of history at the University of Massachusetts, said that Filipinos live in a time when China is moving closer to becoming the most powerful nation in the world.

That possibility makes it important to know how the Filipino descendants of pioneering Chinese migrants define themselves, Chu said.

“Do they still allow people to refer to them as Intsik or ‘Chinoy’ [Chinese-Filipino or Chinese-Pinoy]?” Chu asked in his Jan. 13 talk at the University of the Philippines Baguio about migrant Chinese and the road they took to become Chinoy based on archival, documentary and anecdotal accounts from the 1860s to the 1930s.

Much like the history of the Igorot of the Cordilleras, these tales describe the Intsik as “The Other,” people who are set apart because of their “strange ways,” he said.

Many of the stories that Chu gathered from local government, tax and court records showed a pragmatic Chinese population that was flexible about cultural and racial identity in order to assimilate and obtain some economic advantage and status.

The Intsik was present in almost every flash point of Philippine history.

Chinese descendants, among them Jose Rizal, were inspirations for the Philippine Revolution against Spain. A Chinese, Ignacio Paua, was involved in the revolutionary government set up by Emilio Aguinaldo, Chu said.

Chu, whose UP talk is detailed in his book, “Chinese and Chinese Mestizos of Manila: Family, Identity and Culture, 1860s-1930s,” said Intsik may not have been an offensive word from the start.

Intsik is a Tagalog word, which sounds like the Hokkien word “in-chek” (his uncle), that was used to introduce a Chinese newcomer, he said.

Chu wrote that he found the earliest references to Intsik in the 19th century “Manual del Cabeza de Barangay (Manual of Village Leaders in Manila),” written by Rafael Moreno y Diez in 1874.

The same manual, however, also used “Sangley” (merchant travelers), the Spanish reference to the Chinese.

When the Spaniards first came to Manila in 1570, Chu wrote, they encountered a Chinese settlement composed of 150 men, women and children.

Most of the Chinese families in the Philippines, including Filipinos of Chinese descent, trace their roots to Fujian province, he said.

The Chinese, Chu wrote, traded with the precolonial Filipinos, yet Chinese sea merchants found a profitable niche when the Spanish colonial government opened the Manila-Acapulco galleon trade in 1571.

But Spain soon restricted Chinese migration to the Philippines when their numbers grew, although Spain eventually relaxed its immigration laws due to the colonial government’s extensive requirements for cheap labor, which the period’s Chinese supplied.

Chu said the Spanish government’s prejudice against the Chinese appeared to have been ignited by various issues, beginning with the Chinese “heathen ways” that offended the colonizer whose chief mandate was to convert the natives to Christianity.

Spain’s response was to classify the Chinese apart from the “Indio” (natives), and Sangley became a derogatory term. The Chinese settler was also heavily taxed.

Spanish treatment of Chinese settlers improved in the 19th century, partly because Spain had established diplomatic and economic relations with China and because Chinese descendants soon joined the middle class.

In his book, Chu wrote: “After 1850, with the increasing industrialization and participation of the Philippines in the global market, the number of Chinese contract laborers who worked as stevedores or store employees rose… Those who came may have likely ended up being involved in trade or commerce.”

In exploring the stories of colonial Chinese families, like the clan of Carlos Palanca Tan Quien-sien, Chu concluded that they employed “tactical and strategic ways to evade, manipulate or collaborate with hegemonic (colonial government) efforts to control their bodies, their identities, families, movements and resources.”

Many converted to Catholicism in an attempt to secure citizenship, or widen their social circles, personified by the number of kinship they develop when they perform roles like baptismal godparents, Chu said.

Some married Filipinos and their children became a new class—the Chinese mestizo.

The Spanish and the Chinese mestizo gained some measure of social advantage up to Spain’s waning years, becoming part of the middle class before the rise of American power, Chu said.

When economic dissatisfaction of Spanish rule erupted into a revolution, he said, the Chinese served as “cash cows” by paying taxes to the revolutionary government at the last stages of the Spanish colonial government, and when war broke out against the American invaders.

But Aguinaldo also decreed that all foreigners, including the Chinese, may be recognized as Filipinos once they acquire certificates of naturalization under his government.

That beneficial policy for the Chinese proved to be brief, however, once the Americans took over the country.

According to Chu, most historians credit the liberal economic policies of the American colonial government for the growth of the Chinese business enterprises.

But he stressed that the Americans barred the entry of Chinese workers to their country in 1882 and they imposed the same racist exclusionary law on their colonies in 1902 believing that mixed-race relations, particularly with the Chinese, would spoil their mandate to “preserve the Philippines for Filipinos.”

This policy affected the Chinese mestizo, who were regarded with distaste by the American government for their role in the revolution and in the Philippine-American war that was waged by Aguinaldo, a mestizo, Chu said.

He said the real political demarcation between the Chinese and the Filipino took place in the first decades of the 20th century, when Filipino nationalists adopted the Western idea that they alone could govern themselves.