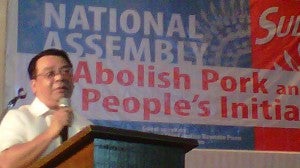 MANILA, Philippines–A militant solon was puzzled why the state-owned Power Sector Assets and Liabilities Management Corp. (PSALM) paid over half a billion pesos for the operation of a non-performing power plant in light of the massive power shortage.

Bayan Muna party-list representative Neri Colmenares even suspected that PSALM was also colluding with the power players to increase the power rate.

In a company disclosure to the Philippine Stock Exchange, the SPC Power Corporation said it was awarded as winning bidder for the operation and maintenance of the 650-megawatt Malaya Thermal Power Plant from 2012 to 2013.

PSALM president and CEO Emmanuel Ledesma Jr. had confirmed to the Inquirer that SPC’s bid was below the approved budget of P556 million for the one-year contract.

Colmenares said Thursday that PSALM paid P555 million for the operation and maintenance of the Malaya Thermal Power Plant.

But Colmenares questioned the use of the contract when it was revealed that the debt-straddled power plant was non-performing.

“What is the use of that contract if the plant is not operating? Filipino consumers are paying for that cost — either in our rates or the universal charge eventually,” Colmenares said in a statement issued Thursday.

“What does SPC Power Corp., a foreign corporation, do that it deserves half a billion pesos when the plant is not even running? The least that the government should have done is to get a truly Filipino company to do this,” Colmenares added.

“We must look into this more comprehensively because as it is there are indications … that the PSALM is part of those who are colluding in the power industry,” he said.

The House energy committee has been conducting its inquiry on Manila Electric Co.’s pending power hike, seen as a result of alleged collusion among power players to jack up prices.

The committee learned that the Malaya power plant, despite a must-offer rule, did not bid in the spot market during the power shortage due to bleeding finances.

The said power plant, Energy Secretary Jericho Petilla had said, has not provided power in case of supply shortage because of its slow start-up.