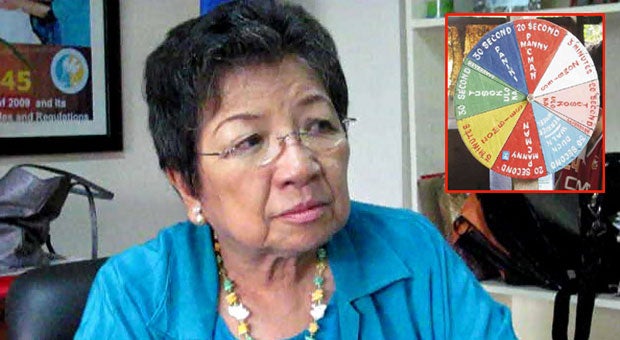 Commission on Human Rights chair Etta Rosales (in photo) said she had requested PNP Director General Alan Purisima to order the investigation of the camp commander in Biñan for possible lapses and for not reporting and acting immediately on the existence of a torture chamber in Laguna. The wheel of torture (inset). INQUIRER/CONTRIBUTED PHOTOS

BIÑAN CITY, Philippines—A 200-square-meter bungalow in a neatly tucked residential community here served as a chamber of horror where officers of the Philippine National Police allegedly out for kicks subjected some of the detainees to a game called “wheel of torture.”

The Laguna police intelligence branch (PIB) is vacating the rented property at St. Francis 1 subdivision it has been using as a “satellite office” since last year after the Commission on Human Rights (CHR) on Monday released a report on alleged police brutality and maltreatment of inmates and criminal suspects brought there.

The officers allegedly used a roulette to determine how the detainees were to be tortured, either as a punishment or to force them to give up information to intelligence officers—a practice thought to have ended with the ouster of the dictator Ferdinand Marcos 28 years ago.

CHR chair Etta Rosales, herself a torture victim during the martial law years, said police did it “for fun” like “a game for entertainment.”

The 26 inmates, who used to be held in an improvised lock-up cell at the satellite office, were transferred on Jan. 24 to the new jail beside the City Hall in Barangay (village) Zapote.

Fifteen detainees from another PIB lock-up cell a few hundred meters away and 21 others from the old city police station at the city center were also transferred to the new police station jail on Wednesday.

Chief Supt. Joselito Esquivel, the regional police director, said the new police station was scheduled to be turned over to his command next month, but because of the CHR report it was activated immediately.

Esquivel on Wednesday inspected the satellite office located two kilometers from the new city jail. He also ordered the shutdown of the “unauthorized” lock-up cells.

“So far, the PIB is the only one I know of but we will go around to make sure,” he said when asked how many such cells there were in the region.

Esquivel said the lock-up cell, which used to be the PIB office’s kitchen area, fenced with iron bars, was unauthorized, although it was not a secret cell.

The courts have been informed where the detainees are being held—supposedly in city or municipal police stations—while the cases against them are pending, he said.

“But since there were just too many of them, police had to improvise by putting up lock-up cells,” he said.

“It’s not a matter of culture of maltreatment but a problem of facilities,” said Supt. Kirby Kraft, Laguna PIB chief.

Apart from the wheel of torture, the detainees also allegedly suffered from regular beatings and other forms of torture.

A 32-year-old male detainee at the St. Francis cell who was arrested for possession of illegal drugs in May last year disclosed in an affidavit the “Dakak” and “tusok ulo” forms of torture.

Dakak, named after a popular beach resort, meant the detainee would be forced to bathe in a sewer while tusok ulo meant he had to stand upside down against a wall for 30 minutes.

“Sometimes (policemen) would pass by me while I was sleeping on the floor and hit me with a taser (electric prod) or fire an empty air rifle into my ear,” he said. He said the policemen were either drunk or were just having fun.

Ten policemen have been relieved while undergoing investigation in connection with the wheel of torture allegations.

“There may have been some lapses but these policemen are few,” Esquivel said. He said new cells should be opened up to decongest jails. “They must be near the local police stations and must be regularly inspected.”

Rosales told the Inquirer on Wednesday that 14 more detainees had surfaced to file torture charges against the 10 policemen, bringing to 29 the number of complainants.

“The wheel of torture is medieval. It’s so bizarre. This is so alarming as it speaks of a dangerous mindset that derives pleasure out of inflicting pain,” she said.

Rosales said she had requested PNP Director General Alan Purisima to order the investigation of the camp commander in Biñan for possible lapses and for not reporting and acting immediately on the existence of the torture chamber.

She noted that most of the suspects had not been charged following their arrests, in violation of a procedure that crime suspects must be charged within 36 hours of their arrests or released otherwise.

Rosales likewise noted the failure of the camp commander to report to the Department of Social Welfare and Development (DSWD) the two minors who were abused.

Rosales said the CHR had informed the families of the two minors of their plight and contacted the DSWD to take custody of them.

“What’s worrying is Laguna is just a stone’s throw away from Metro Manila so how much more from the remote areas?” Rosales said. “This is insane, and speaks of barbaric and appalling acts.”

Purisima has ordered an inspection of all police detention cells, according to Chief Supt. Reuben Theodore Sindac, the PNP spokesman.

“As a matter of rule and policy, the PNP  does not and will not condone, tolerate or allow maltreatment, mistreatment or torture of any civilian, much more prisoners in our custody and we will not allow this in any instance whether in lock-up cells or in the process of investigation,” Sindac said.

He disputed claims that torture was prevalent in police detention cells, citing the case of former Maj. Joselito Binayug who was dismissed from the service after he was caught on videotape torturing an inmate in Manila.

“So time and again, we reminded our police officers not to resort to these extreme measures, abuse and wrongful approach to crime solution and prevention,” Sindac said.—With reports from Cynthia D. Balana and Dona Z. Pazzibugan