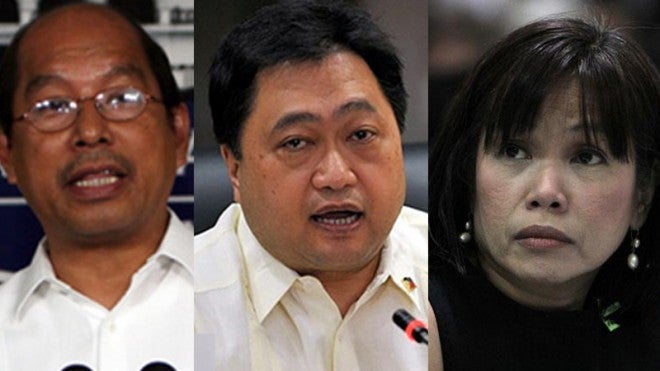 MANILA, Philippines—Three members of President Aquino’s economic team are facing graft and malversation charges before the Ombudsman for allegedly failing to account for P136 billion worth of royalties from the Malampaya natural gas project.

“The nation is in for sad times as three of the highest officials of the land have either failed to account for public funds in their custody, or have allowed the same to be used for illegal purposes,” Biraogo said in his complaint.

He said that the three officials “through gross and inexcusable negligence,” allowed the loss of and or the technical malversation of P136 billion in public funds, “causing undue injury and prejudice of the Filipino people, and resulting in damage or embarrassment to the public service.”

The case is an offshoot of Sen. Ralph Recto’s inquiry during the budget deliberations in the Senate last October on the status of the P136-billion Malampaya Fund.

Recto said that, based on a study that he had conducted, the multibillion-peso fund was gone.

In his complaint, Biraogo said that when Abad appeared at the Senate hearing in Oct. 21 2013, he said that the Malampaya Fund was subject to automatic appropriation, virtually admitting that the money from the fund had been mixed up with other funds.

“Respondent Abad told the Senate that ‘anytime we need to fund an energy-related project, you will always have appropriation to fund that project….The P130-billion balance is really P130 billion of appropriations that is available,’” Biraogo said.

“The fallacy in the statements of respondent [Abad] is that respondents [De Leon and Purisima] admitted to the Senate on Oct. 21, 2013, that the P130-billion Malampaya Fund is gone, i.e. there is no more cash to speak of,” he said.

The complaint also said that respondent De Leon had told the Senate that while there was no more cash to speak of, “the fund was mingled with the general fund and that cash will always be available when needed.”

“There is no doubt that if respondent [Abad] fulfilled his aforesaid duties and obligations as the Secretary of Budget and Management as regards the P136-billion in the Malampaya Fund, this large sum of money could have been accounted for.

Biraogo said the actions of the three officials characterized gross inexcusable negligence that “caused an undue injury to be visited on the government, the Filipino people and to taxpayers like me.”

He said all three were liable for malversation for allowing the Malampaya funds to be “comingled” with the general fund.

The comingling of the Malampaya Fund with the general fund constituted malversation of public funds as the money from the royalties from the Malampaya natural gas facility was, under the law, exclusively for the financing of energy resource development and exploitation programs, Biraogo said.