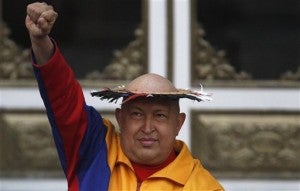 Venezuela's President Hugo Chavez raises his fist into the air after being presented with a “healing hat” by an indigenous woman outside the Miraflores presidential palace in Caracas, Venezuela, Saturday, Sept. 10, 2011. Chavez was visited by a group of Venezuela's indigenous community, who sang and danced for him, offering him a healing prayer as he continues his fight against cancer. AP Photo/Fernando Llano

Chavez, who insists that he was “not sick but recovering” from cancer, greeted the shamans wearing a track suit in the colors of the Venezuelan national flag and wore a crown of feathers the visitors gave him.

Members of the Yekuana, Jivi and Wayuu communities danced, sang and prayed as they invoked their ancestors to protect the Venezuelan leader.

The ritual was aimed at protecting Chavez “against enemies and bad health,” said Miguel Morales, a shaman from the Jivi community.

It also serves “so that he is left in peace, politically,” he said.

“We came from far away, from the (southern) state of Amazonas, to bless him,” Morales said.

Chavez thanked the shamans for the crown of feathers. “I consider it sacred and will keep it for my whole life,” Chavez told them.

“The cancer was removed, and with the power of god and all the gods it has gone and will never return,” said Chavez, 57.

Chavez underwent surgery in Cuba in June to remove a tumor in his pelvic area. He has offered little information on his cancer, for which he underwent chemotherapy in Cuba in July and August. A third round of chemo was done in Caracas last week.

Since the operation Chavez has limited his public appearances, lost weight and lost most of his hair from his cancer treatment.

The leftist populist leader on Wednesday vowed to be fully recovered by December to compete in the 2012 presidential election, when he expects to “knock-out” the opposition.

A recent Datanalysis survey gave him a 49-percent approval rating.