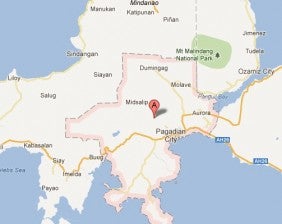 The two were brought to Sitio Dacun in Barangay Picananan of the same town, according to the report.
Tessie Luna managed to escape from their captors, but her husband was unable to break free. The armed men brought him to a pump boat and they sped off.

Police said the responding policemen were able to recover the sport utility vehicle that the abductors used.

The authorities, however, have not identified yet the gunmen. They are also looking for clues on the perpetrators’ lair.