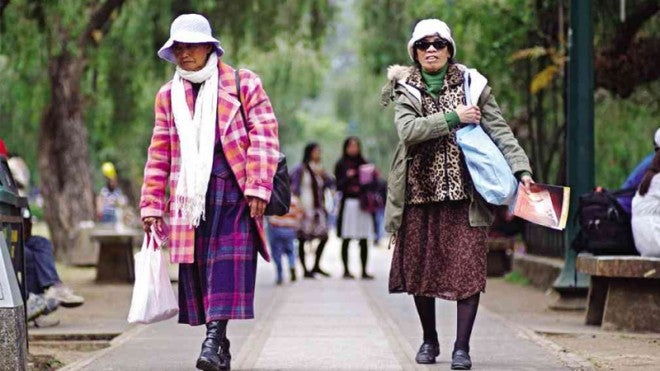 BAYOMBONG, Nueva Vizcaya—The cold spell being felt in the country does not spare even Tuguegarao City in Cagayan province, the warmest area in the Philippines where the country’s highest temperature was recorded in 1912 and 1969.

Theresa Campos, a radio reporter based in Tuguegarao, said that during early mornings, late afternoons and evenings, most residents would wear bonnets and thick sweaters and jackets, a scene almost unimaginable in a city known for experiencing the hottest temperature recorded in the country’s history.

The Philippine Atmospheric, Geophysical and Astronomical Services Administration (Pagasa) said the temperature reading in Tuguegarao dropped to 13.9 degrees Celsius on Sunday, the city’s coldest this year.

The cold weather has surprised residents who are used to the extreme heat.

Corn farmer Rogelio Tomaneng, 47, said he had to wait until daybreak before heading out to his farm in Larion Alto village because his body couldn’t endure the cold.

“For a farmer like me, it is quite embarrassing to admit that in the morning, I almost cannot bear to get out of my house. It’s really strange to feel this cold weather this year,” he said.

And because it’s harvest season, an added expense for corn farmers like Tomaneng is the serving of hot coffee and biscuits to their laborers during breaks.

“If the harvest will take until the afternoon, a bottle of gin and ‘pulutan’ (appetizer) will also be a necessity,” he added.

“The fish are lighter these days because they do not eat that much, probably because of the cold,” said Gerardo Macasu, 39, a tilapia farmer.

For Elisa Apostol, a government employee, the cold weather has caused some inconvenience for many Tuguegarao residents.

“Students and employees are often late going to school or their offices. It will entail added expenses on electricity bills because for one, we can’t help but heat the water we use to bathe,” she said.

Florencia Quizzagan, nutrition officer of Linao West village, said that since the onset of the cold weather, she had noted more residents going to the barangay (village) health center to ask for medicines for common colds.

“I think it’s because people have been used to the hot weather and they want to enjoy the cold [without taking precautions]. But then, they may have slackened a bit, catching these illnesses in the process,” she said.

In Baguio, weather observers said the summer capital experienced its coldest week in 11 years on Jan. 19 to 25 this year.

Except for Jan. 21 and 22, the minimum daily temperature in Baguio from Jan. 19 to 25 was below 10 degrees, prompting weather experts to call this year “phenomenal.”

“The coldest week in the past 11 years (since 2003) was the third week of January …  This year is different. The mercury has been hitting single digit for several days,” said Leticia Dispo, weather specialist of the Pagasa station in Baguio.

Dispo, who has been observing the weather in Baguio for 30 years, said the northeast monsoon was very active, so the cold front was sweeping Baguio and the rest of the country.

On Jan. 19, the mercury plunged to 8.1 degrees, the coldest this year and the eighth coldest since 1961. The next morning, the temperature reading slightly increased to 8.4.

On Monday morning, residents woke up to a morning of 9.4 degrees.

Some residents have started complaining how the nippy days have changed their routines. Dirty clothes and dishes are piling up, as people tend to delay washing these due to the ice-cold tap water. Others are consuming more liquefied petroleum gas (LPG) to heat the water they use for bathing or for instant coffee or tea.

“It’s hard to save LPG and money these days due to the cold. We have to boil water for bathing and even for washing the dishes,” Dispo said.