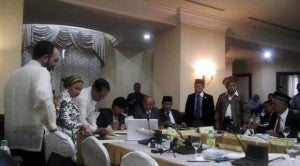 The addendum states that the Bangsamoro waters will extend up to 22.224 kilometers from the low-water mark of the coasts that are part of the Bangsamoro territory.

30 kilometers of water or less between them, the document says.

But if there is more than 30 km but less than 37.224 km of water between them, a line will be drawn at the edge of the 15-km municipal waters of the adjoining local government to demarcate it from the Bangsamoro waters, it says.

The document also designates zones of joint cooperation in the Sulu Sea and the Moro Gulf to protect traditional fishing grounds, benefit from the resources and interconnect the islands of the mainland parts of a “cohesive” Bangsamoro political entity, “provided that the zones do not include the Bangsamoro waters and the municipal waters of all adjoining local governments.”

According to the addendum, there will free movement of vessels, goods and people in the joint cooperation zones.

A joint body for the zones of joint cooperation composed

of representatives of the Bangsamoro government and the central government will be created. It will be tasked with ensuring the participation of concerned local governments.

The intergovernmental relations procedure will ensure cooperation and coordination between the government and Bangsamoro on the exploration, development and use of nonliving resources in the cooperation zones and determine the sharing of income and revenues between the two sides, the document says.

It also says the modes of transportation taking direct routes connecting Sulu, Basilan, Tawi-Tawi and the mainland parts of Bangsamoro and passing through the joint cooperation zones will be considered “intraregional routes.”

The Bangsamoro people, including the indigenous people in the adjoining provinces, and the resident fishermen in the autonomous region will have preferential rights over fishery, aquamarine, and other living resources in the cooperation zones.