KMU: Activists may have been victims of police ‘torture roulette’ in Laguna 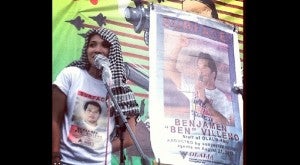 The group called for a “thorough investigation into the injustices committed against the facility’s past and present detainees,” adding that activists allegedly abducted by the military may have been among the victims.

“We suspect that this facility was used in torturing not only the sons and daughters of poor families but also activists fighting for the poor. We demand a thorough investigation into the history of this torture haven,” KMU chairperson Elmer “Bong” Labog said in a statement.

The CHR on Friday exposed the facility, after detainees, arrested on drug charges, complained of torture and maltreatment. It said the detention cell found in the PIB compound was not included in the official list of detention facilities.

Television reports showed a “torture” roulette specifying the kind of torture, as well as its corresponding amount of time, meted out on a detainee.

One portion of the roulette said “30 seconds Paniki,” meaning the person will be hung upside down for 30 seconds.

The detainees complained of being beaten up using steel bars or baseball bats while others were electrocuted.

“Torture is such an abominable violation of human rights and the entire PNP leadership of Laguna and Southern Tagalog should be sacked on the basis of command responsibility. Only such an action will send a strong statement against torture,” Labog said.

The group pointed out that human rights group Karapatan recorded 80 victims of torture under the administration of President Benigno Aquino III.

Labog also mentioned Rolly Panesa, a security guard who was arrested and allegedly tortured after being mistaken for a high-ranking member of the Communist Party of the Philippines.

He said they have reason to believe that there are more torture chambers in the country.

The CHR has already asked the policemen involved, now under restrictive custody, to explain their side. Meanwhile, the detainees were transferred to Camp Vicente Lim.