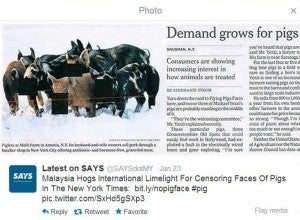 The blacked-out of pig faces in Wednesday’s local edition of the International New York Times certainly came off as a ham-fisted decision to the international media.

Stephanie Strom, author of the Times piece, did not mince her words when discussing the matter with American journalist Jim Romenesko:  “I’m sure the piggies would be upset to know their faces are considered as religiously offensive as a woman’s bare breasts.”

The move by KHL Printing Co, printers of the Malaysian edition, left Adam Taylor of US-based news and tech site Business Insider puzzled: “What shameful thing had these pigs done to be forced into anonymity?”

Many media outlets, such as US-based online news aggregator Huffington Post and Qatar-based network Al Jazeera, also chose to highlight reactions from netizens on their sites, with a common theme being that of ridicule over the decision.

In the South East Asia Real Time blog of the Wall Street Journal, Jason Ng wrote that censors in Malaysia feel there are things people just shouldn’t see: “Nudity is one of them. Pigs, it appears, is another.”

Ng also included a tweet by Fadiah Nadwa Fikri, a local activist with Lawyers for Liberty, in his report: “Just like cats, pigs also have rights to be photographed and show off their cuteness.”

A Reddit user, workerbotsuperhero, highlighted the case in the social news and entertainment website’s World News section on Thursday.

At time of writing, the post had earned 150 upvotes and 63 downvotes, with many comments in the thread expressing scorn and disbelief.

Internet giant AOL also hosted a video from award-winning online video network GeoBeats on its side, which described the incident as a misplaced initiative: “In preparing the Malaysian version of the New York Times, the company that prints it took it upon themselves to black out the faces of the pigs featured in the issue.”