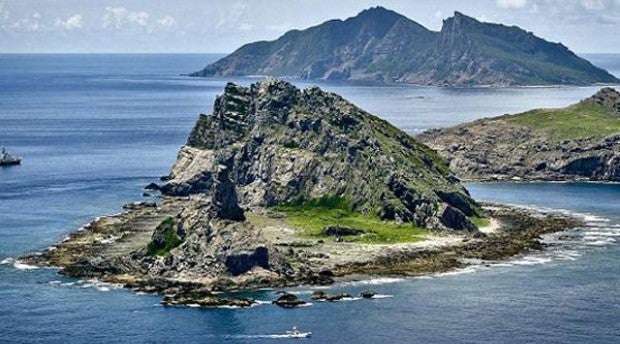 The Senkaku islands, known as Diaoyu in China. AP Photo

BEIJING—China said on Friday it had begun to issue warnings to foreign military planes entering its self-declared air defense zone over the East China Sea amid heightened tensions with its neighbors, especially Japan.

Bitter rhetoric between the neighbors has spiked since Japanese Prime Minister Shinzo Abe made a late-December visit to a war shrine in Tokyo that outraged Beijing.

Abe this week compared the tense relationship to the pre-World War I rivalry between Britain and Germany.

Japanese officials say the comment was meant as a warning to avoid war.

He said the planes identified several foreign military aircraft, flew alongside them and issued them warnings.

He didn’t identify the planes or say when the patrol was conducted.

The zone is a “purely defensive measure that conforms to international practice,” Shen said.

The United States, Japan, the Philippines and other countries denounced the zone’s declaration in November as provocative and said they would ignore China’s demands that their military aircraft announce flight plans, identify themselves and follow Chinese instructions.

China has said it would take unspecified measures against aircraft that disobey.

In a policy speech on Friday in Tokyo, Abe reiterated Japan’s position, saying it would “not tolerate any attempt to change the status quo by force.”

He said Japan would beef up its defensive capabilities “in order to defend the safety in the southwestern region, as well as the vast sea and airspace around Japan.”

The zone is seen primarily as targeting Japanese and US military flights over the East China Sea. Its declaration followed more than a year of heightened tensions between China and Japan over control of a series of tiny uninhabited islands in the East China Sea.

The zone pointedly incorporates the island chain, known as Senkaku in Japanese and Diaoyu in Chinese, which are controlled by Tokyo but claimed by Beijing.

The zone also incorporates a vast area of international airspace from Taiwan to the Korean Peninsula and overlaps in places with zones enforced by South Korea and Japan.

China and Japan have been engaged in a heightened war of words since Abe visited the Yasukuni shrine honoring war dead, including commanders executed as war criminals for committing atrocities in China and elsewhere during World War II.

China has furiously protested the visit and launched a new round of invective against Japan in international media and diplomatic circles.

Abe says the visits are intended to pay homage to those who died and to show his commitment to pacifism, not to praise war criminals.

China’s foreign ministry said Abe’s World War I comments made on Wednesday at the World Economic Forum in Davos, Switerzerland, and his visit to the shrine were signs of belligerence.

“The Japanese leader, while paying lip-service to a positive peace policy, is effectively adopting a policy of military expansion and preparation for war,” ministry spokesperson Qin Gang said on Friday.

But Japan’s Cabinet Secretary Yoshide Suga said Abe was drawing the Britain-Germany analogy as a warning for the two Asian countries not to repeat the same mistake of being drawn into a war despite their extensive trade ties.

Suga also told reporters that he is aware of reports that China had issued warnings to foreign aircraft, but declined to confirm them.

“I don’t understand what China means by voice-warning,” Suga said. Japan’s defense ministry has not reported any “abnormal flights” by Chinese military jets since Beijing declared its air zone, he said.

China’s announcement about issuing warnings shows Beijing is serious about enforcing the zone and will likely be seen as an escalation by Japan and others, said Huang Jing, a China expert at Singapore National University’s Lee Kuan Yew School of Public Policy.

China has consistently unnerved its neighbors since announcing the air defense zone with no advance warning and little explanation, he said.

China has rejected all such criticisms, and a government-backed scholar said a significant sector of the public believes Beijing hasn’t gone far enough in challenging Tokyo and the United States.

“Japan has its own air defense zone, so why shouldn’t China?  This is something China should have done a long time ago,” said Qu Xing, head of the China Institute of International Studies, a think tank affiliated with the foreign ministry.