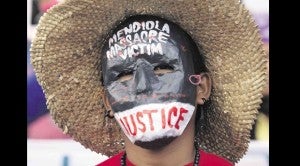 THE SO-CALLED Mendiola massacre, in which at least 12 farmers demanding land reform were killed at the start of the presidency of democracy icon Corazon Aquino, continues to hound the late President’s son, Benigno Aquino III. NIÑO JESUS ORBETA

DAVAO CITY—Twenty-seven years after the Mendiola massacre, a farmers organization said the killings have continued, with at least 21 farmers and indigenous people murdered in Southern Mindanao under the Aquino administration.

On Jan. 6, farmer Marcelo Monterola was shot dead in front of his house in Maco town, Compostela Valley province.

Monterola was active in campaigning for agrarian reform and in demanding quality relief and rehabilitation services for areas devastated by Typhoon “Pablo” in 2011.

“The massacre turns 27 today,” said Arnado, referring to the deaths of at least 12 farmers marching on Mendiola leading to Malacañang to demand land reform under the administration of the late President Corazon Aquino, Mr. Aquino’s mother. Mr. Aquino’s father, the late Sen. Benigno Aquino Jr., is also a victim of an unsolved murder.

International organization Human Rights Watch (HRW) had the same report on the human rights situation in the country, saying Mr. Aquino “failed to match his rhetoric in support of human rights in 2013 with meaningful action to end impunity.”

“The Aquino administration has said all the right things about ending abuses in the Philippines, but what’s missing is the political will to translate those promises into action,” said Phelim Kine, deputy director of HRW in Asia.

Among the signs that impunity continues, HRW said, is the continued killings of journalists.

In 2013, 12 journalists were murdered, bringing to 26 the number of journalists killed under the second Aquino administration.

The HRW said that in only six of the 26 cases have police made arrests. In May 2013, the Committee to Protect Journalists labeled the Philippines the third “most dangerous country” in the world for journalists after Iraq and Somalia.

The HRW, in its World Report 2014, cited the killing of Vergel Bico, editor of the Calapan City weekly newspaper Kalahi. Bico, 41, who had been reporting on the drug trade, was shot in the head on Sept. 4 last year by motorcycle-riding gunmen.

On Aug. 29, 2013, Nanding Solijon, a broadcaster at radio station dxLS, was shot seven times by two motorcyle-riding assailants while crossing a street in Iligan City, the report said.

HRW also reported that the “superbody” created in 2013 by the government to speed up the investigation and prosecution of extrajudicial killings had “remained inactive during much of 2013, even as new cases were reported by domestic human rights groups.”

While arrests have been made and charges have been filed in two cases—the murders of journalist and environmentalist Gerry Ortega in 2011 and journalist Rowell Endrinal in 2004—“the masterminds of these crimes remained at large,” said HRW.