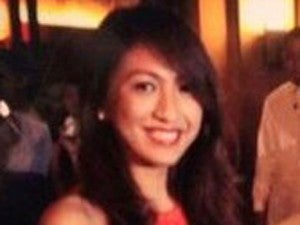 MANILA, Philippines – A daughter of the main suspect in the pork barrel scam is in London, according to a counter-affidavit she submitted to the Department of Justice on allegations of tax evasion by the Bureau of Internal Revenue (BIR).

From the United States, Jeane Catherine Lim Napoles, daughter of alleged pork barrel scam queen Janet Lim-Napoles, is now in London as indicated in the counter-affidavit she submitted to the Department of Justice to answer allegations of tax evasion by the Bureau of Internal Revenue (BIR).

Jeane Napoles, daughter of Janet Lim-Napoles, submitted an eight-page counter-affidavit, which she subscribed and sworn to before Consul-General Senen Mangalile of the Philippine Embassy in the United Kingdom.

The young Napoles said the properties that were being reported as belonging to her were actually owned by her parents.

Napoles has been slapped with a complaint for willful attempt to evade or defeat tax and deliberate failure to file return and pay tax for 2011 and 2012 as stated under the National Internal Revenue Code of 1997.

BIR Commissioner Kim Henares said that Napoles was able to acquire a condominium unit at the Ritz Carlton in Los Angeles, California worth P54.73 million; and has a share, equivalent to P1.49 million, in a Bayambang, Pangasinan property purchased in 2012.

However, she said the young Napoles did not file any income tax return (ITR) in 2011 and 2012; nor were there any records of returns filed that will prove that gifts, bequests or devices were given to her.