‘3 bodies a day still being found in Tacloban’ 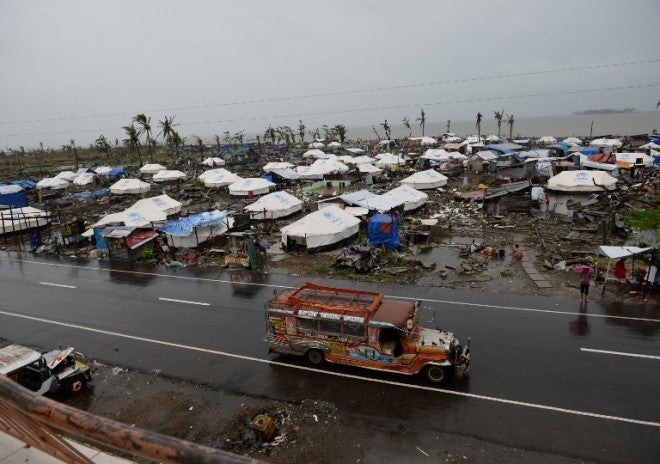 Tents are erected as temporary shelters for residents whose houses were flattened by Super Typhoon Yolanda in Tacloban City in this Dec. 25, 2013, photo. More than two months after Yolanda devastated Tacloban, authorities continued to find an average of three bodies a day, Mayor Alfred Romualdez said on Thursday, Jan. 23, 2014. AFP PHOTO/TED ALJIBE

After earlier tangling over the government’s handling of Super Typhoon Yolanda’s aftermath, Romualdez shook hands with Interior Secretary Mar Roxas at the hearing on the law creating the National Disaster Risk Reduction and Management Council (NDRRMC).

As the government moved to carry out a massive rehabilitation plan, Romualdez said that city officials continued to retrieve bodies and ferry them to the National Bureau of Investigation for processing.

Romualdez, however, said he was puzzled why Tacloban appeared to be the only local government unit that was bringing bodies to the NBI for DNA processing for the sake of their loved ones.

He said he pitied Roxas and Defense Secretary Voltaire Gazmin because they had to move from City Hall whose roof had been blown away and seek shelter in a police station in the immediate aftermath of the storm.

“We should have NDRRMC headquarters in every region that is storm-proof,” he said.

No sparks flew between Romualdez and Roxas in their face-off at the hearing in the Senate and a news conference later.

“Yes,” Romualdez said when asked if all was well between them.

In the hearing, Roxas clarified that the letter he demanded from Romualdez had to do with the city council’s failure to muster quorum to impose curfew.

Roxas said that when incidents of looting became widespread after the storm, policemen raised the concern of whether they could impose curfew without a city ordinance.

When he raised the matter with Romualdez, the mayor said the city council could not muster a quorum to pass the ordinance imposing the curfew.

“When they said they could not muster a quorum, I said let’s put in writing so that the police will have something in black and white, and avoid being charged in case they arrested people,” he said.

Roxas also clarified that he did not tell Tacloban city officials that they should fend for themselves.

“The help from the national government arrived nonstop not only for Tacloban, but for the entire Leyte and Samar provinces, and other areas ravaged by Yolanda,” he said.

Roxas also confirmed telling Romualdez to be “careful” but in the sense that if an LGU stopped functioning, the President’s “residual general welfare powers and authorities” would come into play.

“The President didn’t want this to be misconstrued,” he said.

In earlier hearing, Romualdez said the national government sought the immediate passage of an ordinance imposing a city-wide curfew to check looting.

He expressed reservations because the prosecutor’s office and courts were still closed to entertain any violator who would post bail. He said checkpoints were effective.

Days later, Roxas called city officials to a meeting, and told Romualdez: “We have to legalize everything here.”

“I asked him: What is to legalize here?” the mayor said. “He replied:  Well, this is a gray area and the national government is coming in, and doing all this.”

“And then I told him: ‘Why is it illegal? As far as I know the President is the President of the Philippines and he’s also the President of Tacloban City. I don’t see anywhere in the law that you need a letter, an ordinance from me for you to come in, and do what you’re doing,’” he said then.

He recalled Roxas as telling him: “You have to be very careful because you are a Romualdez, and the President is an Aquino.”

On Thursday, Sen. Ferdinand Marcos Jr., who temporarily presided over the hearing, advised Roxas to be flexible when it came to determining who should be in charge in a disaster-stricken locality.

“Perhaps you should study the possibility of being more flexible. We should not be saying, ‘You’re the first responder, you back them up’…  If the police, military are there, and a problem crops up like looting, then they should come in. We keep hearing first responders not being able to respond,” Marcos said.

The senator said the standard operating procedure should be amended so that people or agencies that are capable should be the first to respond to disasters.

Romualdez had lamented that while Roxas and Gazmin were in the city when the storm struck, the police and military were not mobilized soon enough to maintain law and order.

Roxas explained that the augmentation of 1,260 policemen took time because they had to be airlifted and then brought to the disaster areas by land.

“I don’t’ want to leave the impression that bureaucracy prevailed here,” he said. “Whoever responded, responded.”

In the first days, Roxas said they used bicycles to scour the areas, and admitted they had no satellite phones.

“There was no load, eh,” he chuckled. Then turning serious, he said it was “an oversight on our part.”