“My name is Davidson Bangayan and I’m not David Tan.” This was how Bangayan introduced himself Wednesday when he faced for the first time the Senate committee on agriculture and food that is hearing the rice smuggling in the country. Video by INQUIRER.net’s Ryan Leagogo

Davidson Bangayan, aka David Tan, controls the importation of rice by financing farmers’ cooperatives that want to bid for import permits from the National Food Authority (NFA), Justice Secretary Leila de Lima told the Senate committee on agriculture on Wednesday.

Speaking at the resumption of the committee’s investigation of the smuggling of rice into the Philippines, De Lima, quoting justice department witnesses, said Davidson Bangayan and David Tan, known in the Bureau of Customs (BOC) as the Goliath of rice smuggling in the country, were the same.

“They know him as DT, for David Tan,” De Lima said.

Subpoenaed to appear at the hearing, Bangayan showed up to answer the senators’ questions, but denied that he was David Tan.

“My name is Davidson Bangayan, and I am not David Tan,” he said at the start of the hearing.

She said that one witness claimed that Bangayan, using at least three coordinators, recruited farmers’ cooperatives to bid for rice importation permits from the NFA.

According to the witness whom De Lima did not name, Bangayan paid for the cooperatives’ license fees, bonds, document form fees required by the NFA and the BOC, and shouldered the airfare and accommodation expenses of the cooperatives’ representatives while preparing for the bidding.

“One day before the bidding, the recruits would troop to DT’s office in Dagat-Dagatan, Caloocan City. There, they would prepare the prequalifying bid documents,” De Lima said, quoting the witness.

The recruits are promised incentives of P10 per bag once the cooperatives win the local or old stocks bidding. They get an extra P3 per bag incentive “once the deal is there,” she said.

“For importation bidding, a P20 per bag incentive is promised to the winning cooperative. In exchange for all these benefits, the cooperatives will allow DT to use them as fronts during the biddings. DT will have the discretion in the sale and distribution of the imported rice,” she said.

A view of the of the Senate session hall during the committee on agriculture’s investigation of the smuggling of rice into the Philippines. PHOTO BY RYAN LEAGOGO/INQUIRER.net

The other witness, De Lima said, described other forms of smuggling, including declaring rice shipments as construction materials; recycling import permits if the rice shipments were going through customs without the permit being stamped “consumed,” and diverting excess rice intended for the government to the warehouses of traders.

“If there are 10 truckloads of rice, five go to the NFA warehouse and the other five to the buyers. So there’s a diversion of rice,” De Lima said.

She said that once the National Bureau of Investigation has built an airtight case, it would file charges against the people involved in rice smuggling in the Department of Justice for preliminary investigation.

The hearing called by Sen. Cynthia Villar’s committee also heard that Bangayan’s own employee and lawyer had ties with Starcraft, the trading company that asked courts to stop the BOC from seizing tons of rice imported without permits.

Villar told reporters after the hearing that she did not need to prove that Davidson Bangayan and David Tan were the same. But using findings by several Senate committees during the 2012 inquiry into rice smuggling, she said her committee managed to establish that Bangayan had indirect links to “possible” rice smuggling.

Questioning Bangayan during the hearing, Villar elicited admissions that he had a partner in rice trading and other commodities named Willy Sy and that he owned Okinoshima Recycling Inc., a scrap metal trading company.

Witnesses in the Senate’s 2012 inquiry pointed to Sy as their “broker” in rice importation, and identified him as an employee of Okinoshima.

“We also did some transactions,” Bangayan said, referring to Sy.

“So you’d see that the broker of Starcraft is Mr. Sy, who is your employee,” Villar told Bangayan.

Villar made a PowerPoint presentation showing the recommendations of the previous Senate inquiry, as well as diagrams of the relationships of rice traders with Sy.

Bangayan said he was “not connected” with Starcraft. He also said that Sy was “independent” and that he dealt with him on a per project basis.

“We, on the committee on agriculture, are relying on the information given by our farmers. If we don’t divulge this, we’ll be accused of connivance,” Villar said.

De Lima said that the NBI had also summoned Sy to its investigation of rice smuggling that had been prompted by the 2012 Senate inquiry.

Sy has yet to appear for questioning, De Lima said.

Irked by his insistence that he was not David Tan, Sen. Juan Ponce Enrile reminded Bangayan that he had been impleaded as David Bangayan, aka David Tan, in an arbitration case in Singapore over a scrap metal deal.

“You’re lying here. You should tell the truth otherwise you will be jailed today,” Enrile told Bangayan, showing copies of the case.

“You’re involved in an arbitration case in Singapore. You can’t lie there. You’ll be jailed by Lee Kuan Yew,” he added.

Jesus Arranza, chair and president of the Federation of Philippine Industries, confirmed Enrile’s information, saying that he was actually sued for libel by Bangayan for talking about details of the case on a radio program that he hosted with Enrile and former Makati City Rep. Teodoro Locsin Jr.

The libel case was dismissed, he said.

De Lima also confirmed that Bangayan admitted in a 2005 affidavit that he submitted in the libel case that he was also known as David Tan.

Newly appointed NBI Director Virgilio Mendez told the Inquirer that the identity of David Tan was no longer part of the NBI investigation of rice smuggling “because that issue has been settled.”

“We are moving forward, we have established that Bangayan and Tan are the same. And now our job is to gather more evidence to link him there,” Mendez said.

The NBI investigation’s priority now is to identify the rice smugglers, he said.

He said a government task force would go after the rice smugglers and “unmask them.”

“We will expose them and with the coordination of other government agencies, we hope to get them soon,” Mendez said.

The senators heard that Starcraft has managed to secure orders from courts in Manila and Davao City stopping the customs bureau from seizing its shipments of rice imported without permits.

Customs Commissioner John Sevilla said the BOC’s campaign against rice smuggling had been hobbled by the temporary restraining orders (TROs).

Sevilla said a court in Lemery, Batangas province, issued an injunction against the BOC even before the shipment ordered by a company named Bold Bidder arrived, prompting an incredulous Sen. Ferdinand Marcos Jr. to remark: “They’re that brilliant.”

Importing rice without a permit is smuggling, Sevilla said.

He confirmed the existence of a “tara system” in the BOC, under which containers are released without inspection in exchange for certain amounts. 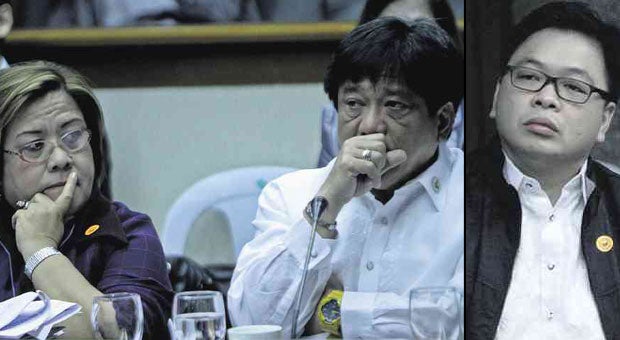 LOOKING FOR RICE SMUGGLER DAVID TAN Justice Secretary Leila de Lima and Agriculture Secretary Proceso Alcala attend the hearing of the Senate committee on agriculture and food looking into the massive rice smuggling in the country perpetrated by a certain David Tan. At right, Davidson Bangayan denied he is “David Tan.” But De Lima said Davidson Bangayan and David Tan were the same person. RICHARD A. REYES

Under questioning by Sen. Alan Peter Cayetano, Salazar confirmed that Starcraft was one of his clients.

He, however, admitted that he had once written to the NFA to clarify that Starcraft did not need a permit to import rice in connection with the country’s commitments to the World Trade Organization.

“Yes, as far as writing a letter to the NFA,” Salazar said when asked by Cayetano if Starcraft was one of his clients. “But I never appeared in any case.”

Cayetano, who is also a lawyer, said Salazar was “free to contract any client.” But he pointed out that both Bangayan and Starcraft “seemed to be using the same people with (the same) expertise.”

Bangayan, who sat poker-faced, admitted going into joint venture agreements with the cooperatives to import rice.

He said funding the cooperatives to import rice was not illegal.

“In industry practice, we have what we call consolidation,” he said.

Bangayan said that in 2012, he took part in the importation of 1,900 tons of rice under the minimum access volume (MAV) program.

“If the requirements for eligibility were scrutinized, you couldn’t get through,” Bangayan said.

Cayetano retorted: “That’s what they said in the pork barrel (scam), but it also got through… Sorry, Mr. Bangayan, we have to bring this up. In your case, you’re saying it’s legal for you to finance them, and then you share in their profit? To any of our secretaries, is this legal?”

Villar said the Senate previously said that tapping cooperatives as fronts is illegal.

Alcala said Bangayan needed to be a registered rice trader before he could import rice.

“According to the records of the NFA, he is not a registered rice trader,” he said.

Former NFA Administrator Angelito Banayo was not called to the hearing.

Sen. Grace Poe suggested that Davao City Mayor Rodrigo Duterte, who had threatened to kill rice smugglers if they entered his city, be invited to the Senate investigation.

Reacting to reports of Poe’s suggestion, Duterte said he would appear before the Senate agriculture committee if called.

“I was listening to the investigation,” he said. “Yes, of course, I will go.”—With reports from Nancy C. Carvajal in Manila and Germelina Lacorte, Inquirer Mindanao