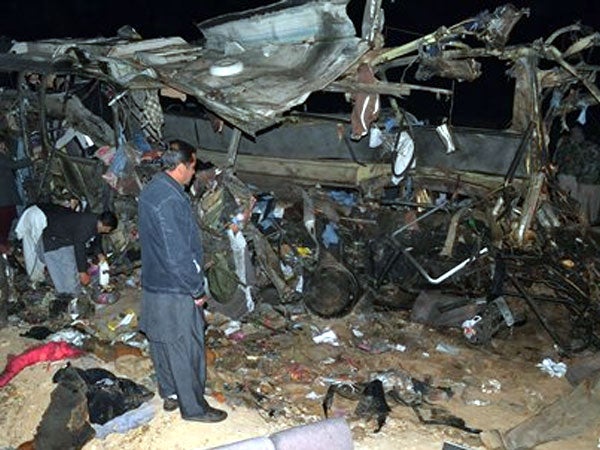 People look at the wreckage of a passenger bus destroyed in a bomb blast in the Mastong district, near Quetta, Pakistan, Tuesday. AP

PESHAWAR, Pakistan—A bomb rigged to a bicycle hit a police patrol on its way to guard a polio vaccination team in northwestern Pakistan on Wednesday, killing six policemen and a boy, the police said.

The attack was the latest in a surge in violence stretching across Pakistan that has killed over 100 people so far this month and left many questioning whether the government has a plan to tackle the country’s stubborn militancy problem.

The bomb, set off by remote control, struck close to a busy town market, he said. The boy who was killed along with the six policemen in the patrol was just a bystander, Khan added.

The attack came following a particularly deadly day in Pakistan. A car bomb struck a bus carrying Shiite pilgrims in a restive region of the southwest on Tuesday, killing 20 people, including women and children.

Also on Tuesday, three health workers were killed in an attack on a polio vaccination team in the southern port city of Karachi.

No one immediately claimed responsibility for the latest attacks but the Pakistani Taliban have killed thousands of civilians, policemen, soldiers and officials in recent years. The militants are campaigning to overthrow the government and install their harsh brand of Islamic Shariah rule.

The Taliban targeted the military in attacks on Sunday and Monday, killing a total of 34 soldiers and seven civilians in northwestern city of Bannu and in the garrison city of Rawalpindi near the capital, Islamabad, where a suicide bomber blew himself up near the country’s main military headquarters.

Polio vaccination teams have also come under relentless attacks. Pakistan is one of only three countries where the polio virus is still endemic and militants have killed more than 30 polio workers and troops protecting them in recent years.

Militants oppose vaccinations against polio and consider such campaigns a cover for spying against Pakistan and a conspiracy to allegedly make male Muslim children sterile.

Pakistani Prime Minister Nawaz Sharif has long supported a policy of negotiating with militants instead of using military force to subdue them, but so far the Pakistani Taliban have shown little desire to negotiate with his government.

The government has come under heavy pressure to aggressively tackle a surge in militant violence instead of solely relying on efforts to start peace talks with the Taliban-led insurgents.

After the two attacks against the army, the Pakistani air force Tuesday pounded militant hide-outs in North Waziristan near the Afghan border, killing dozens of people.

The Pakistani military in recent years has carried out several offensives against the Taliban in the tribal regions bordering Afghanistan, but North Waziristan has largely been spared. The United States has repeatedly struck the area with drone strikes targeting militant commanders.

There were conflicting claims about who was killed in the airstrikes, which began late Monday and continued into early Tuesday.

A military official speaking on condition of anonymity because he was not authorized to speak to the media said they killed 40 insurgents, but two residents said civilians were among the dead.