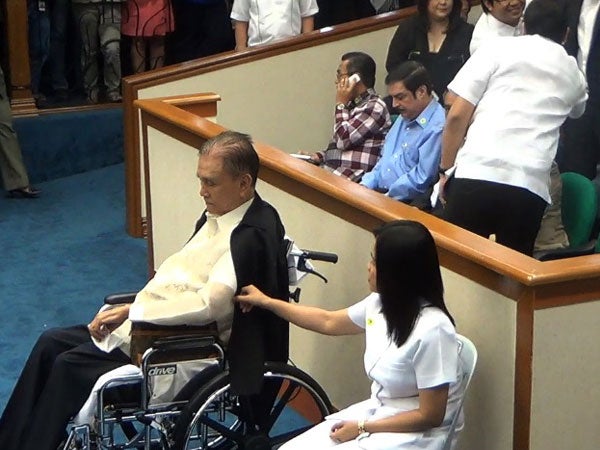 Former Senator Ramon Revilla Sr. listens to the privilege speech of his son Ramon Jr. at the Senate on Jan. 20, 2014. The 86-year-old patriarch of the popular political-show biz clan, was one of the earliest clients of detained businesswoman Janet Lim-Napoles, the alleged architect of the P10-billion pork barrel scam, according to whistle-blower Benhur Luy. PHOTO BY NESTOR CORRALES/INQUIRER.net

Former Sen. Ramon Revilla Sr., the 86-year-old patriarch of the popular political-show biz clan, was one of the earliest clients of detained businesswoman Janet Lim-Napoles, the alleged architect of the P10-billion pork barrel scam, according to whistle-blower Benhur Luy.

Revilla is the father of Sen. Ramon “Bong” Revilla Jr., who  has been accused of plunder in the Office of Ombudsman for allegedly diverting P500 million of his pork barrel funds to fake nongovernment organizations (NGOs) controlled by Napoles.

“The company that was used in implementing these projects was Jo Chris Trading and we delivered Foliar Fertilizer,” Luy said in the e-mail sent through his lawyer, Levito Baligod. Jo Chris is Napoles’ main trading firm named after her daughter.

Luy said that he, Napoles, and her husband, Jaime, used to call on the elder Revilla in his Senate office, where he first met Richard Cambe, a trusted aide who served the father and later the son.

Referring to the claim of Revilla Jr. in his privilege speech on Monday that his signatures on documents presented as evidence by the National Bureau of Investigation to the Ombudsman in the plunder case were forged, Luy said all letter-requests from the senator were original and the signatures there were “all his.”

“The only time we would sign for him or for Atty. Richard Cambe, the designated staff, was when we would file for liquidation, which was done after the funds were withdrawn by the NGO and the project was supposedly implemented,” Luy said. This was done on orders of Napoles, he said.

Luy said that there were also instances when Cambe signed the liquidation papers, when he was in the Napoles office “collecting his boss’ rebate as well as his.”

He explained that the “downloading” of funds from a lawmaker’s pork started with the senator or representative writing a letter to either the Senate President or the Speaker of the House on how the lawmaker’s PDAF would be implemented. This included the amount and the implementing agency.

The wheelchair-bound Revilla Sr. was present and wept openly when his son delivered his privilege speech on Monday. The younger Revilla said his father had urged him to defend the family name.

Revilla Jr. acknowledged in a statement last August that his eldest son, Leonard Bryan Bautista, was a business partner of Napoles’ son James Christopher Napoles, but he was insistent that their enterprise was “legal and legitimate.” He said the two were schoolmates in high school.

“I understand that they, with other friends, were in the business of importing and selling rubber shoes. This is the PB&J Corp.,” said Revilla who denounced an attempt by some sectors “to malign us.”

“If they want to destroy me, let them go after me. Spare my children,” Revilla Jr. said.

The Inquirer reported in April 2012 that Bryan Revilla and Borgy Manotoc  were among the guests at the Napoles couple’s 30th wedding anniversary. The two were described by high society scribe Louie Cruz as “young friends of the Napoles children.”

In a July 8, 2011, letter to Assistant Commissioner Arcadio B. Cuenco Jr., Revilla Jr. confirmed his signatures on various  documents covering the request, transfer, and liquidation of  his pork barrel funds to NGOs that later turned out to be owned by Napoles.

The letter was part of the special audit conducted by the Commission on Audit on PDAF releases from 2007 to 2009 during which P503.69 million of Revilla’s pork barrel allegedly went to dubious NGOs.