UN says running out of food for Central Africa 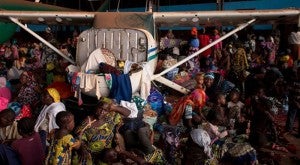 In this Sunday, Dec. 29, 2013 file photo, Chadians waiting for evacuation flights settle in for the night inside an airport hangar in Bangui, Central African Republic. AP

UNITED NATIONS – The United Nations said Monday it was running out of food for a growing number of homeless people in Central African Republic, with spreading unrest hobbling distribution efforts.

The UN’s World Food Program (WFP) said 38 trucks carrying rice are stuck at the Cameroon border and drivers were refusing to cross the frontier due to the threat of attacks.

“WFP cereal stocks are close to being exhausted and pulses too will soon run out,” said a WFP statement.

“Suspending food distributions could lead to further tension, particularly among the 100,000 displaced people in the overcrowded Bangui airport camp,” it added.

WFP regional director Denis Brown said the main road from Cameroon into Central African Republic, which has been in conflict for nearly a year, was a humanitarian “lifeline.”

She said the agency was considering airlifting food to Bangui where more than 500,000 people are now said to be homeless.

The UN agency said it was concentrating current supplies on Bangui airport and had already cut rations to the northern town of Bossangoa.

“Deliveries to other locations cannot be carried out until trucks can drive safely along routes and their movement to Bangui is secured,” said the statement.

Rebel forces ousted Central African Republic’s president in March last year, but an interim government lost control of the country. Rival Muslim and Christian militias are now battling each other and rogue checkpoints have been set up on nearly all main roads.

UN leader Ban Ki-moon said he was “extremely concerned” about the violence and humanitarian crisis in Central African Republic in a statement welcoming the election of Catherine Samba Panza as the country’s new interim leader.

Ban renewed a call for international funding for the African force attempting to bring order to the country, said his spokesman.

ADVERTISEMENT
Read Next
Classes suspended as LPA triggers rains, floods
EDITORS' PICK
Timeless Elegance in the Philippines’ Most Distinguished Home Kitchens
James Reid, Nadine Lustre confirm split
Pilot test of motorcycle taxis may be ended early
Asean accepts Trump invite to US meet
What exactly did Vilma Bautista — Imelda’s ex-aide — do?
‘A greener, cleaner tomorrow’: A how-to guide for Filipinos who want to help with today’s energy crisis
MOST READ
Taal Volcano and surroundings have become ‘inflated’
Ayala Land bares facts on Technohub deal: P4B in lease to UP
If Marcos runs in 2022 polls, he must accept results – Robredo
Duterte legacy: Chinese criminals
Don't miss out on the latest news and information.