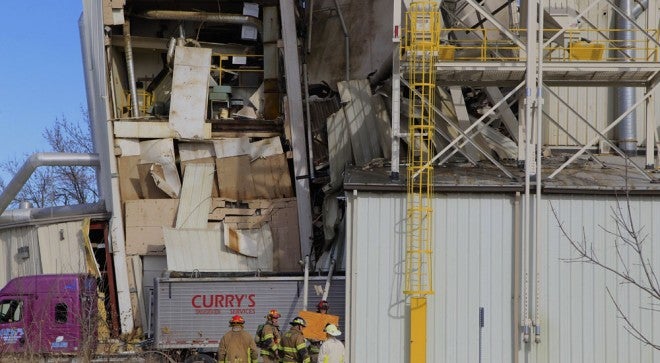 Firefighters stage outside the International Nutrition plant in Omaha, Neb., Monday, where a fire and explosion took place Jan. 20, 2014. At least nine people have been hospitalized and others could be trapped at the animal feed processing plant. AP

Omaha Police Lt. Darci Tierney said Monday evening that all 38 of the workers who were in the building at the time had been accounted for.

Officials said two workers died, 10 were hospitalized and seven were hurt but refused treatment. The other 19 workers escaped.

Search-and-rescue experts worked into Monday evening to stabilize the building. It was not immediately clear whether their work would continue into Tuesday.

“We haven’t cleared the building yet because of the significant risk to our people,” Interim Omaha Fire Chief Bernie Kanger said.

Authorities don’t know what caused the blast, but Kanger noted that there were no hazardous chemicals at the plant. International Nutrition makes products that are added to livestock and poultry feed to make them more nutritious.

The federal Occupational Safety and Health Administration will determine the cause of the explosion.

The explosion knocked out the lights in the building and sent workers scrambling for safety.

Nate Lewis said he was on the first floor when he heard the explosion. The building went dark, so the 21-year-old used light from his cellphone to make his way across the production floor and outside.

“I was a production line worker, although I don’t know if I want to be that anymore,” said Lewis, who’s worked at International Nutrition for about four months.

Worker Jamar White said he heard a loud crack and looked up to see the back wall of the building collapsing.

Afterward, White said, he could see inside the third floor of the building where at least two co-workers were screaming for help.

There plant sits in an industrial area of Nebraska’s largest city. There are no residences nearby and no other buildings were evacuated after the explosion.