‘One Nation in Prayer’ for calamity victims starts 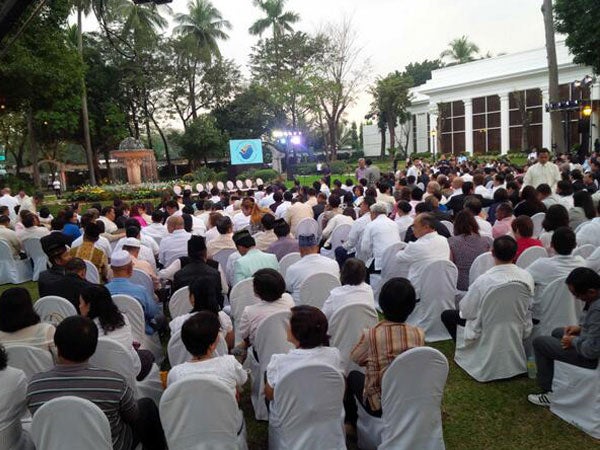 MANILA, Philippines – To remember and pray for the victims of recent calamities, Malacañang on Monday held an interfaith prayer meeting at the palace grounds.

Around 600 people gathered outdoors for the start of the “One Nation in Prayer” event, which will feature a series of prayers led by President Benigno Aquino III representatives of various faiths.

Those invited to lead the prayers are Luis Antonio Cardinal Tagle of the Catholic Church, Police Superintendent Imam Ebra Moxsir of the Imam Council of the Philippines, Commissioner Zenaida Pawid of the National Commission on Indigenous Peoples, Isaias Samson of Iglesia ni Cristo and Bishop Jonel Milan of the Philippine Council of Evangelical Churches.

The event was organized to pray for the thousands of lives lost last year to the Zamboanga City siege in September, the 7.2-magnitude earthquake in October, Super Typhoon Yolanda in November, and other calamities that befell the country.

Composer Ryan Cayabyab, who recently received a medal from the Vatican for his religious compositions, and his group of singers will perform musical numbers in between prayers.