Farmers set up reward money in fight against rice smuggling 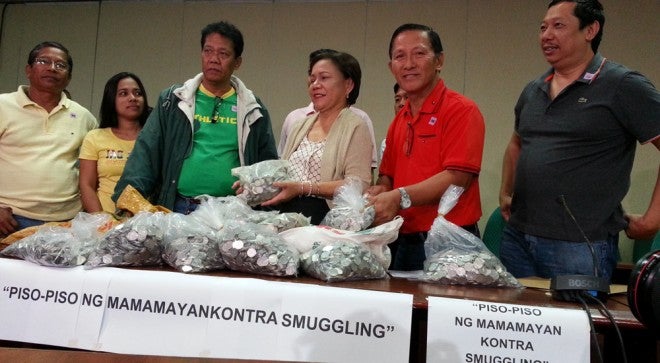 MANILA, Philippines – An initial fund of P55,000 was set up by rice farmers from northern and Central Luzon Monday which will be offered as a reward for witnesses who will identify smugglers of rice and other agricultural products.

Senator Cynthia Villar, head of the Senate committee on agriculture, received the fund made up entirely of coins donated by members of the Confederation of Irrigators Association (CIA) and Arya Progresibo – Nueva Ecija.

“This will be a starting fund as a reward for witnesses to come forward and identify smugglers,” Villar said in a press conference.

She said that the farmers decided to use coin donations as a symbol for their battle against smuggling because a certain David Tan, who has been implicated in billion-peso worth of rice smuggling in the country, was previously an alleged smuggler of coins to China.

(Us small farmers have banded together to donate our coins to be used as a reward for those who will testify to the identity or help in apprehending rice smugglers. We have called this campaign as `Piso-Piso ng Mamamayan Kontra Smuggling.)

Manalo added in his statement that they are angry and feel insulted that Atty. Argee Guevarra, who is considered a nationalist lawyer, is defending alleged big-time rice smuggler David Tan.

Oscar Legaspi of Arya Progresibo-Nueva Ecija said in a statement that they are worried that smuggled rice would again flood the market due to these developments.

Villar has been investigating rice smuggling in the country since last year. The hearings in the Senate are set to resume this month.

“We cannot know if he was the lone smuggler,” Villar said when asked whether there are others with Tan.

“This is a statement that our poor farmers, it’s a big amount for them,” she said.

During their courtesy call, the farmers thanked senators, especially Villar, for their efforts to unmask rice smugglers and put a stop to the illegal trade.

Manalo said millions of concerned farmers nationwide are closely watching developments in the Senate and warned senators who will try to defend the smugglers. They’re hoping that through the Senate inquiry rice smuggling will stop, he added.

The Confederation of Irrigators Association and Arya Progresibo are member organizations of the umbrella group Samahang Industriya ng Agrikultura or SINAG.