Faith amid tragedy in 2 festivals 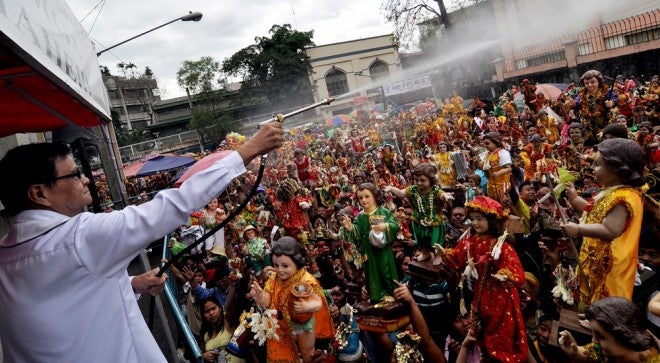 SPRAY BLESSING. A Roman Catholic lay minister sprays holy water with a hose to bless the images of the Sto. Niño carried by devotees during the Feast of Sto. Niño at the Santo Niño de Tondo Parish in Tondo, Manila, on Sunday. Grand festivals honoring the Child Jesus, such as the Sinulog in Cebu and the Ati-atihan in Aklan, were also held on Sunday. RICHARD A. REYES

Stories of faith and environmental protection, and the importance of family were told by 35 contingents that participated in the Sinulog 2014 dance competition in Cebu City.

An estimated 3.5 million devotees braved the drizzle and cold wind along the 6-kilometer route of the Sinulog Grand Parade Sunday to honor the Sto. Niño, the Child Jesus.

In another street dancing and celebration on Sunday, at least 100,000 revelers and devotees packed the main streets in Kalibo, Aklan province, for the culmination of the Ati-Atihan Festival—also in honor of the Sto. Niño.

People in colorful costumes from towns of Aklan and neighboring province brought images of the Sto. Niño in various sizes. Several foreigners and “balikbayan” or Filipinos working and living abroad attended the revelry and the Mass.

“Many have observed that there are more people this year. Maybe it is because of [Supertyphoon ‘Yolanda’]. It has deepened the faith of the devotees and those whose beliefs were weakened have come back,” Kalibo Bishop Jose Corazon Tala-oc told the Inquirer.

Aklan was one of the provinces worst hit by the typhoon that left tens of thousands homeless and without livelihood. It was also devastated by Typhoon “Frank” in 2008.

Ati-Atihan is a weeklong festival in which the participants are covered in soot to mimic the Ati, the indigenous people who first settled Panay. Others wear costumes that range from ragged to regal, Oriental to the Western, and primitive to space age while dancing and singing in the streets.

Sinulog (from the Cebuano word for water current) is a dance ritual in honor of the Sto. Niño. The dance moves are in sync with the beat of the drums, resembling the current of what was then known as Pahina River in Cebu province.

The contingent from the municipality of Panglao in Bohol told the story of how the 7.2-magnitude earthquake that struck on Oct. 15, 2013, damaged structures, including centuries-old churches, in the province.

The dancers from Talisay City Central School in Talisay City and La Paz National High School in Bogo City, both in Cebu, showed the death and devastation caused by Yolanda and how finding hope in the

Sto. Niño helped in their recovery.

A total of 35 contingents participated in the Sinulog-based and free interpretation categories in this year’s Sinulog.

One contingent, Pundok San Roquehanon of Talisay City, backed out from the competition because of financial problems.

Ninety-four others joined in the float, “higante” (giant) and puppeteers competition.

This year’s Sinulog competition started at 9 a.m. Sinulog participants went around the carousel route to the delight of about 2.1 million spectators spread around the Sinulog’s 6-km carousel route.

He was also present when Cebu City Mayor Michael Rama declared the formal opening of Sinulog 2014 at 9:10 a.m. With them were Vice Gov. Agnes Magpale and Vice Mayor Edgardo Labella.

Sinulog is not just for Catholics, said Rolf Larsen, a 60-year-old Norwegian Protestant who traveled from across the world to see Sinulog.

“There is no distinction [between Catholics and Protestants]. We believe in one God. We belong to the same family. We pray to the same Lord,” he said.

Larsen, who watched the Sinulog Grand Parade with his Filipino girlfriend, Lorena Capunan, 45, said the festival was a great way to strengthen faith and be thankful to the same God for all the blessings.

“This is a fun way to relive your faith, no matter what your religion is,” he added, smiling.

Larsen, who owns a cleaning shop in Norway, heard of Sinulog from his Filipino workers in Norway and since then, he had wanted to experience the grand festival himself.

Capunan, who is from Surigao province, said it was Larsen who persuaded her to go to Cebu and be part of Sinulog.

“This is my first time. I’m not a devout Catholic but joining Sinulog is a good start to devote myself to Him completely,” Capunan told the Inquirer in Cebuano.

Capunan and Larsen are planning to return to Cebu next year for the Sinulog festivities.

Two groups from Placer town in Masbate province—Tribu Himag-ulaw for the free interpretation category and Kulturang Placereño—were among the dancing contingents for the Sinulog-based category. Placer was among the towns hit by Yolanda.

Its mayor, Ian Peter Sepulveda, told the Inquirer that joining Sinulog was the town’s commitment to the Sto. Niño. Placer has been joining the festivity since 2009.

About 100 dancers, mostly students joined by some employees of Placer’s municipal government, made up the two contingents. Sepulveda said this was the town’s way of thanking the Sto. Niño for keeping it safe from Yolanda.

The typhoon devastated central Philippines on Nov. 8 last year and killed more than 6,000 people. Placer did not suffer any fatality, although its agricultural sector was adversely affected.

“We are not expecting to win. We are just thankful,” Sepulveda said.

Despite the cold and gloomy weather, the revelers remained on the streets to enjoy Cebu’s grandest and biggest celebration.

The contingents, from dancers, puppeteers and floats, paraded around the major streets in the carousel route that started and ended at the Cebu City Sports Center. These were fewer this year compared with last year’s.

According to Rama, this year’s event was more organized than past stagings because the city increased the number of crowd control personnel and placed exits around the streets.

Earlier in the day, the parade went on smoothly despite the absence of ropes and cordons along P. del Rosario Street toward New Imus Road.

But at past 2 p.m., the floats and contingents started to build up at P. del Rosario near the University of San Carlos’ main campus. However, that didn’t stop 75-year-old Estrella Yagonia from joining the crowd.

Wearing her festive red shirt, Yagonia had her right cheek painted with face paint. She told the Inquirer that she never gets tired of participating in the grand parade.

In Kalibo, two months after being battered by Yolanda, Aklanons poured out in their tens of thousands in street dancing.

At least 100,000 revelers and devotees packed the main streets of the capital town of Kalibo for the unique “sadsad” (street dancing) to the beat of drums and the melodic tune of lyres. Last week, 80,000 to 100,000 people joined the daily street dancing.

Thousands of devotees flocked to the “pahilot” or “paeapak” where those seeking cure for diseases join a healing rite of the Sto. Niño de Kalibo.

One of them, Jane Devera, came from Panit-an town in the neighboring province of Capiz. It was her third straight year to attend the festival.

“I came here to pray that the supertyphoon will not happen again. Our house was among those destroyed,” Devera said.

Mayor Wilbert Ariel Igoy of Malinao town said his town mates had worked hard to join Ati-Atihan despite the destruction brought by Yolanda. Some 1,000 houses in the town were destroyed.

George Calaor, coordinator of Task Force Tabang-Aklan, a group helping the typhoon survivors, said the surge in people participating in the festival showed that Aklanons were still needing help.

“We hope the rehabilitation assistance and projects, especially from the government, will be implemented,” he said.

On Sunday, about 5,000 people braved the cold early morning to attend the High Mass officiated by Tala-oc.

Devotees overflowed on the grounds of Kalibo Cathedral and Pastrana Park where the Ati tribes assembled. The crowd reached the side streets leading to and from the plaza.

In his homily, Tala-oc recalled the pain and suffering brought by Yolanda. But he said what was more touching was the help that came, even from people from other countries.

The prelate said the aid providers offered “not only relief goods but gestures of friendship.”

After the Mass, Kalibo Mayor William Lachica, following tradition, raised an image of the Sto. Niño in front of the crowd and shouted: “Viva Señor Sto. Niño!”

After being silent for more than an hour, the drums and lyres erupted, with the tribes and revelers dancing while raising and waiving the Sto. Niño.

The religious procession and street dancing, the festival highlight, started at 3 p.m. and was expected to last for eight hours, or until the procession returned to the cathedral.—Reports from Doris Bongcac, Charisse Ursal, Carmel Matus and Nestor P. Burgos Jr., Inquirer Visayas

Millions turn out for Sto. Niño procession in Cebu

Read Next
Revilla letter to COA belies forgery claim
EDITORS' PICK
Geek out at TOYCON 2022 powered by Smart Signature
UK’s Boris Johnson will resign, BBC reports
High inflation: Your P1 is now worth only 87 centavos
High-risk pregnancy: Reducing your risk is in your hands
Unemployment rate up to 6% in May
House energy committee chair Arroyo bats for cheap electricity
MOST READ
Suspect in grisly killing of missing woman in Bulacan arrested
Kim Atienza’s daughter flaunts bikini body in response to critics of her ‘revealing photos’
Cop slain in Isabela ambush
FDA probes popular Filipino noodle brand for ‘high level of ethylene oxide’
Don't miss out on the latest news and information.