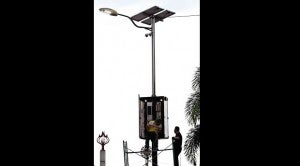 TECHNICIANS program the electronic billboard of the solar-powered LED street light with a CCTV at Rajah Sulaiman Park in Manila on Friday. GRIG C. MONTEGRANDE

A P2.2-BILLION project to illuminate the City of Manila with 10,000 solar-powered street lamps kicked off with the operation of the first 10 units on Friday.

Switched on in ceremonies held at Rajah Sulayman Park across Malate Church, the lighting installations are also equipped with security cameras and electronic signboards, and are expected to significantly reduce power consumption for the local government, which is currently saddled with over P600 million in unpaid electricity bills.

The LED lamps, cameras and signboards were supplied by Global Goldgoal Inc., a multinational company engaged in renewable energy projects, under a public-private partnership (PPP) with the city government.

The next 50 lamps will be lit up on España Boulevard, to be followed by 20 more units on Blumentritt and 10 on P. Sanchez in February.

The rest of the units will be set up in other areas of Manila in the next two years at an estimated project cost of P2.2 billion, excluding shipping and installation costs.

Under the PPP, Goldgoal will get the earnings from advertisements to be placed on the LED signboards

“(The project) will not only help us save on electricity but also make us compliant with the renewable energy program of the government,” said Estrada, who upon assumption of office last year disclosed that City Hall had up to P613 million in unpaid electricity bills.

The former President said the project was also in line with his urban renewal program that included the rehabilitation of Roxas Boulevard through better lighting, improved landscaping, more convenient facilities and increased security.

“Safety is another feature of these solar-powered streetlights because they also have CCTVs that can monitor illegal or criminal activities,” Estrada noted.

Hospital to spruce up plaza

Also in Manila, a private hospital has offered to shoulder the maintenance of Plaza Rueda and transform it into a more attractive hub for community activities instead of being a mere terminal for tricycles and pedicabs.

Rhais Gamboa, president of Medical Center Manila (ManilaMed) said “we offered to keep (the plaza) clean and do some basic fixing” through landscaping and the construction of a police outpost and a covered walkway.

Located next to ManilaMed, Plaza Rueda is the triangular park at the corner of Taft Avenue and UN Avenue. It is currently crowded with ambulant vendors, tricycles and pedicabs.

“ManilaMed, as a medical institution and part of this community, has a moral obligation to share its capabilities and services to the people in this area, particularly the less privileged,” Gamboa said in a recent interview.

Plaza Rueda could serve as a point of convergence for Manila-Med’s mission and City Hall’s health and urban renewal programs, Gamboa added. Once given a makeover, the plaza can serve as a venue for social gatherings and public health programs and even performances.

As for the vendors and drivers, Gamboa said, “We’ll have to find a way to allow them to maintain their livelihood that is consistent with the plan to keep the place clean.”