Millions turn out for Sto. Niño procession in Cebu 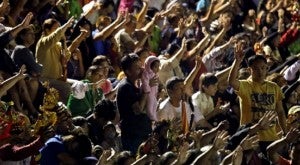 CEBU CITY, Philippines – Throngs estimated by the police at 3.2 million people lined the streets of Cebu City or joined a solemn procession traditionally held on the eve of the feast of the Child Jesus or Señor Sto. Niño under overcast skies.

Chief Insector Wildemer Tiu, chief of the Waterfront Police Station, said the crowd, despite the cloudy skies and occasional drizzles, was slightly larger than last year’s. He said the estimate was based on the length of the procession and the thickness of the crowds that lined the streets.

Despite the slight drizzles, the people remained in the procession or stayed on the sides, reciting prayers and singing praises to the Sto, Niño, the patron of the city.

People on the sides of the streets waved their hands — some holding flowers, others balloons or handkerchiefs—as the image of Señor Sto. Niño passed.

The devotees included parents carrying their little kids, senior citizens and entire families, many from out of town.

Emma Taguib from Tubigon town, Bohol, came to Cebu with her mother-in-law Edith. They have been coming to Cebu for the Sinulog Festival, as the feast is generally referred to, for past three years.

“We came here for the foot procession and the pontifical mass on Sunday. It has been my promise to Señor Sto. Niño to do this every year,” Taguib said.

She said her faith in the  Sto. Niño became even stronger after Bohol was hit by a 7.2-magnitude earthquake last October.

The celebration of the feast of the Señor Sto. Niño de Cebu, which is held every 3rd Sunday of January, kicked off Saturday morning with a fluvial parade in the Mactan Channel.

Dozens of outrigger boats, barges and cruise ships packed with devotees escorted the MV Santo Niño de Cebu, a galleon replica, bearing an image of the Child Jesus that was blessed by Blessed John Paul II.

Also on the main boat was an image of Our Lady of Guadalupe, the patroness of Cebu.

Despite some drizzles, the fluvial parade started at about 6:30 a.m. from the Ouano Wharf in Mandaue City and ended two hours later at Pier 1 in the Port of Cebu across the channel from Mactan Island.

It was preceded by a Mass and a foot procession that carried the statues from the Saint Joseph Church in Mandaue City to the Ouano Wharf.

Thousands were estimated to have joined the send-off for the icons from the Mandaue City church to the wharf.

Former Cebu governor and now 3rd district representative Gwendolyn Garcia carried an image of the Sto. Nino while dancing on board MV Free Spirit Vessel, one of the ships that joined the fluvial procession.

Thousands more watched the procession from the shore or from ships docked at the piers. They waved and honked horns as the image of the Santo Niño passed by. Some set off firecrackers. There were also dance contingents in costumes paying homage to the Sto. Niño.

The vessel with the icons of the Sto. Niño and the Virgin Mary were escorted by the clergy and several men dressed as medieval Spanish soldiers.

Cebu Archbishop Jose Palma led the devotees in welcoming the Sto. Niño as it arrived at Pier 1.

A foot procession from the Cebu port area bore the images to the Basilica Minore del Santo Niño for a Mass that featured a reenactment of the first Mass and Baptism in Cebu in 1521.

On that occasion, the original images of the Sto. Niño and the Virgin Mary were given by Ferdinand Magellan and Augustinian missionaries to Cebu’s King Humabon and Queen Humahay, who were christened Carlo and Juana.