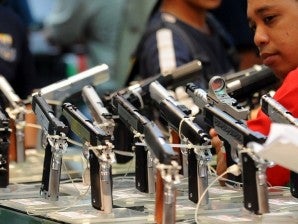 MANILA, Philippines—As the Philippine National Police implements the new gun control law this January, journalists, bank tellers, priests, cashiers among others, can now bring their licensed firearms at work without necessarily being “under actual threat.”

With the implementation of the Republic Act no. 10591 or the comprehensive law on firearms and ammunition, individuals with the said profession, along with licensed nurses, doctors, accountants, engineers, and lawyers, will be permitted to carry with them their properly licensed guns while they are on duty.

This also means, these professionals would not be required to submit a threat assessment certificate issued by the PNP as the law automatically recognizes them as persons “in imminent danger due to the nature of their profession or business.”

After the legislation was officially passed last year, the PNP Firearms and Explosives Office will start enforcing this month the Implementing Rules and Regulation of RA 10591 following its release on January 3.

Under the IRR, a six-month amnesty for loose firearms holders will be implemented to allow the gun owners to either renew their expired license or register their unlicensed guns avoiding stiffer penalties.

The PNP FEO, as part of the final gun amnesty program, has started establishing online units and servers offering an option to loose firearms owners to avail themselves the amnesty online.

RA 10951, or the so-called “Marcosian” gun law,  imposes penalties such as imprisonment of at least 30 years for illegal possession of firearms.

The firearms office chief told INQUIRER.net that if the applicants for renewal will be able to present all the required documents, their application could be accomplished in a day.

Detailing the projected license application process, Oppus said the approval and rejection of renewal applications will be made online, submitted documents will be scanned, payments can be done through banks.

In the improved firearms licensing system, the FEO will strictly require the applicants to submit their updated neurological examination and drug test.