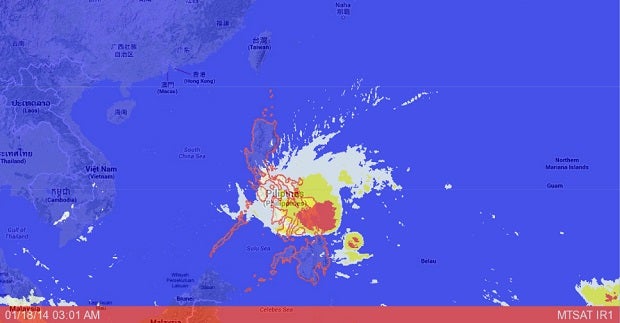 DAVAO CITY, Philippines—Seven provinces in Mindanao came under storm warning on Saturday after the low pressure area that had been causing rains and floods in many parts of the island for days developed into a tropical depression.

The weather bureau said the low pressure area intensified into a tropical cyclone between 8 a.m. and 10 a.m. on Friday as thousands of people fled rising floodwaters in a fresh round of evacuations in the Agusan region, and the death toll from a week of heavy rains rose to 34.

As of 4 p.m. Friday, Tropical Depression “Agaton,” the first cyclone to hit the Philippines in 2014, was seen  190 kilometers east of Surigao City, or 165 km northeast of Hinatuan, Surigao del Sur, the Philippine Atmospheric, Geophysical and Astronomical Services Administration (Pagasa) said.

Pagasa said it expected Agaton to be 13 km northeast of Davao City by Sunday morning.

Agaton has winds of 55 kilometers per hour and is moving southwest at 5 kph, Pagasa said.

Agaton will bring moderate to heavy rainfall to areas within its 300-km diameter, Pagasa said.

According to Pagasa’s 24-hour weather outlook, Eastern Visayas and the Caraga Region will have cloudy skies with moderate to occasionally heavy rain showers and thunderstorms, which may trigger flash floods and landslides.

At least 8,000 people fled villages along the flooded banks of the Agusan River in the past 24 hours, said John Uayan, operations official for the regional civil defense office.

“The rains come to this region around this time, but this year has been terrible,” Uayan said.

The fresh round of evacuations brought the number of people temporarily sheltering in schools and government buildings in the Agusan region to nearly 59,000, he said, adding some have been there since heavy rains began on Jan. 10.

Part of Butuan City and more than 200 villages and districts lining the banks of the Agusan are flooded, Uayan said.

Floods and landslides unleashed by heavy rains killed 15 people in the Agusan region, including a woman who drowned on Thursday, he said.

Nineteen other people were killed earlier in the week along Mindanao’s east coast, including areas still recovering from Typhoon “Pablo” that left 1,900 people dead or missing in December 2012, the Office of Civil Defense in Manila said.

About 155,000 other people were staying in evacuation centers in these areas, it said.

At least 600 families were still sheltering in evacuation centers and the provincial government expected the number of evacuees to increase again as Agaton hit the province, Gonzales said.

“We are prepositioning additional [relief supplies] while responders are already on alert,” he said.

Classes from the nursery to the elementary levels were suspended on Friday.

Loreto Rirao, director of the civil defense office in the Davao Region, said he feared fresh disasters with Agaton coming as Davao Oriental, Davao del Norte and Compostella Valley were just recovering from flash floods and landslides caused by days of heavy rains.

Some communities have just received relief, after being cut off when the rains washed out bridges and landslides blocked roads in the region.

Rirao said his office and the local governments had started to prepare to meet emergencies to be caused by Agaton.

“Our emergency responders are now on standby in the region,” he said.

Rirao called on residents to heed warnings and leave danger zones to avoid injuries and deaths.

Fishermen in the region have been advised to stay ashore, he said.

The San Francisco Water District in Agusan del Sur said on Friday its forest rangers had found that a crack on Mt. Diwata that was discovered in 2011 that had grown larger, probably because of incessant rains earlier in the week.

The water district said the crack was located 400 meters above San Francisco, and warned of a landslide that could bury a big part of the town.

According to the water district’s assessment, the first to be hit by the landslide would be Freshville Subdivision in Alegria village.

Forest rangers found the 50-meter-long and 3-m-wide crack on the slope near Tinggangawan Creek on Wednesday, the water district said.

It said the watershed monitoring team had reported that the soil in the area had started to “shift down” and the foundation of falcata trees near the crack had grown “weaker.”

Elmer Luzon, the water district’s general manager, said the authorities must act soon or a disaster was just waiting to happen in the area.

“We have alarmed concerned government agencies and the local government about possible landslides, but the response has been lukewarm,” Luzon said.

The authorities seemed to be not interested despite the water district’s offer of P1.2 million to the local government for the building of barriers in landslide-prone areas of the mountain, he said.

Aside from the growing crack, the monitoring team  also found landslides in several areas around the seven villages below the mountain, Luzon said.

One landslide buried the water district’s intake box in Tinggangawan Creek, he said.

Davao Oriental Gov. Corazon Malanyaon said on Friday the heavy rains that battered her province earlier in the week sank part of a hill in Old Macopa village in Manay town.

She appealed to the national government for additional aid for her province, which had barely recovered from the devastation caused by Typhoon Pablo.

In Compostela Valley, the local government in New Bataan town ordered evacuations on Friday after Pagasa announced that the new year’s first cyclone was coming.

Marvin Esperanza, the town’s information officer, said the order for fresh evacuations were given although the residents who fled the flooding earlier this week had just returned home.

“New Bataan is still in a state of calamity … but with Agaton coming, we are activating disaster [response plans] in the villages,” Esperanza said.

Agaton developed from the tail of the low pressure area that separated from the body of the system on Thursday, Pagasa said.

The bad weather forced the suspension of sea travel in parts of the country that were on the cyclone’s path.

In Cebu, 13 vessels stayed at port on Friday after storm signals were raised. At least 634 travelers were affected by the trip cancellations.

Cmdr. Rodolfo Villajuan, Philippine Coast Guard chief in Cebu, said the canceled trips included those of the Weesam Express fastcraft to Tagbilaran City and Ormoc City and those plying the Danao City-Camotes route.

In Bicol, 8,000 travelers were stranded at the ports in the region because sea travel had been suspended since Thursday night due to bad weather.

Rafael Bernardo Alejandro, director of civil defense in the region, said 472 vehicles were also stranded, most of them at the Port of Matnog in Sorsogon province.

In Eastern Visayas, a ferry ran aground in bad weather off Bato town in Leyte early on Thursday.

More than 100 passengers of MV Our Lady of All Nations remained on the ferry on Friday as efforts to rescue them failed.

A Coast Guard vessel and  MV Prosperity, a sister vessel of the stricken ferry, tried to approach  Our Lady of All Nations, but were driven back by strong winds, according to Petty Officer 1 Mario Rosaldo Madrigal of the Coast Guard’s Bato Station.

Two rescue vessels that arrived separately on Thursday to rescue the passengers of the ferry were also beaten back by strong winds, Madrigal said.

Medallion Transport Inc., the ferry’s operator based in Cebu City, had requested for air assistance to drop food to the passengers and crew of Our Lady of All Nations, Madrigal said.

Sea travel has been suspended in Eastern Visayas since Thursday due to bad weather. With reports from DJ Yap in Manila; Mar S. Arguelles, Inquirer Southern Luzon; Jhunnex Napallacan and Joey Gabieta, Inquirer Visayas; and AFP