UN: Only 20% of funding given to ‘Yolanda’ victims to rebuild homes | Inquirer News
Close
menu
search

UN: Only 20% of funding given to ‘Yolanda’ victims to rebuild homes 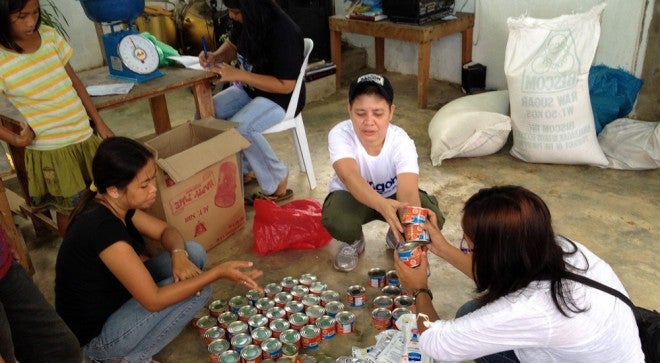 Volunteers pack relief goods donated from Kodiak, Alaska, to be distributed to Supertyphoon “Yolanda” victims in Isabel, Leyte. As heavy rains hamper activities to help victims of Yolanda, the need for food aid might extend until the next rice planting season in May, according to the UN Office for the Coordination of Humanitarian Affairs. AP PHOTO/KODIAK FILIPINO BIBLE CHURCH, REMIGIO BELEN JR.

MANILA, Philippines – The United Nations (UN) Friday has called for increased support for the victims of typhoon Yolanda (international name Haiyan) citing that only 20 percent of funding has been provided so far to help people rebuild their homes.

“I am particularly concerned that just 20 percent of funding has been secured to provide tools and materials so that people can rebuild their homes,” Under-Secretary-General for Humanitarian Affairs and Emergency Relief Coordinator Valerie Amos said in a statement posted on the UN website.

“Two months after the storm, the scale and spread of humanitarian needs is still daunting,” she said.

Aside from shelter from the weather, Amos also cited the urgent need of farmers to get tools and seeds for the next planting season.

Visayas and Mindanao are currently experiencing severe rains from tropical depression Agaton. At least 34 have already been killed from the floods in Mindanao.

The provinces of Leyte and Samar, which bore the brunt of Yolanda when it first made landfall last November, are also currently experiencing intense rains due to Agaton.

To help the Philippine government in its rehabilitation efforts, the UN has laid out a one year strategic response plan for $800 million since last December and the pledges have now reached $331 million or around 42 percent.

“Donors, humanitarian agencies, and most of all, the people of the Philippines, have achieved a huge amount in the past two months, but the delivery and reach of aid remains uneven,” Amos said.

She said that there was still no steady supply of electricity in many areas and that schools are still having problems in holding regular classes despite having opened last January 6.

“During the next few months, the humanitarian community will focus on ensuring a smooth transition from urgent assistance to long term recovery and rehabilitation efforts,” she said. “We count on the continued support of donors for this work.”

More than 6,000 people have been killed by Yolanda while millions more have lost their homes and livelihood.

UN Secretary General Ban Ki-moon personally came to the Philippines last December and went to Tacloban to get a first-hand observation of the destruction and the rehabilitation efforts.
He said in a press conference that he was “deeply moved and inspired” by what he saw.