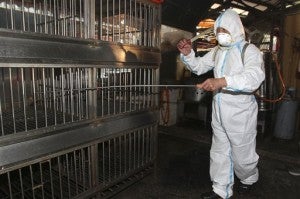 BEIJING–China has reported a new death from the H7N9 bird flu virus, state media said Friday, bringing the toll this year to at least four as the disease returns following its 2013 outbreak.

It was at least the fourth fatality from the disease since January 1, after Guangdong reported its first death last week and the provinces of Zhejiang and Guizhou each announced one more.

The H7N9 human outbreak began in China in February 2013 and reignited fears that a bird flu virus could mutate to become easily transmissible between people, potentially triggering a pandemic.

Cases and deaths dropped significantly after the end of June, but have begun to pick up with the onset of winter.

Official statistics compiled by China’s health authorities show that by the end of October 2013 there had been 45 deaths in the outbreak on the mainland.

Hong Kong has reported two deaths from H7N9 so far this year.