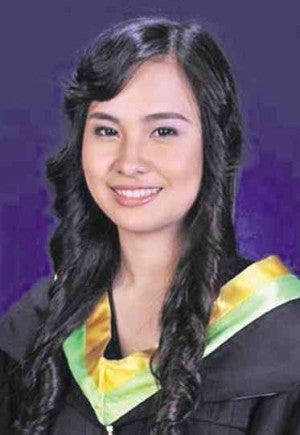 They went to different schools, prayed in different churches. It made no difference.

“I pray every day to thank God because everything I’ve achieved came from Him,” Dio told the Inquirer. “Our family went through a lot but I find solace when I pray to God and He has answered my prayers.”

“It’s God’s miracle, really. Because I look at myself and I know I have my limitations. God is really good,” Danan, for her part, said.

Dio and Danan were among the 10,977 aspirants who passed the December examinations out of a total of 35,475 examinees, according to the Professional Regulation Commission (PRC).

Dio and Danan are both 21. Both thanked God for what they had achieved. 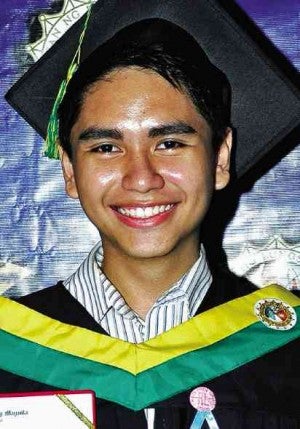 NO. 1 Nikko Martel Viray Dio of PLM: We prayed we receive the grade we deserve. CONTRIBUTED PHOTO

Aside from maintaining eight hours of sleep every night and watching what he ate, Dio held novenas with his PLM batchmates while reviewing for his examination.

“We prayed that all our hard work bear positive results and we receive the grade we deserve,” Dio told the Inquirer.

Dio visited Quiapo Church, St. Jude Church, Sta. Cruz Church, Our Lady of Mercy and Our Lady of Grace—among others—“to make sure that God will hear my prayers.”

When he heard the news, he took to Facebook to thank God. He also thanked his family for the emotional and financial support he got from them.

Dio had known pain early. He was in fourth year high school when his father died after suffering a stroke.

“He was in a coma for a month. It was a difficult time for our family and it influenced me to pursue nursing to help care for other people,” said Dio, the youngest child in a brood of three.

Dio was also inspired by his auntie, Linda Darger, who is a nurse in the United States and helped finance his education. Imelda Dio, another auntie working in America, supported him, too.

Dio learned he had topped the exam when he opened his Facebook account on Wednesday afternoon and saw messages of congratulations from friends.

He replied on his Facebook status: “OMG LORD! Thank you ’kaw na talaga (You really are the One). Thank you din sa advance na pagsabing mag Top 1 ako (Thank you also for saying I am No. 1). To GOD be the Glory.”

Since the information came from a blog, he had reservations at first and waited for the news from the PRC.

On Thursday morning, he wrote: “Thanks to everyone who believed in my capabilities, most especially to God.”

Then he thanked his mother, Fely, and other relatives: “I know this journey had not been easy for us but at last it has borne fruit and came with a bonus. I love you.”

Asked by the Inquirer if he wanted to work abroad, Dio said: “If there is an opportunity, I’ll take it. But as of now, I want to give back to the people, because as a graduate of PLM, the taxes of Manileños helped pay for my education.”

Even months before her graduation from college, Danan already made it a habit to go to church and pray at exactly 9 p.m.

In her devotional prayers, Danan said she asked God to help her pass the board exam, which would open up many employment possibilities for her.

“It didn’t matter where I was. At 9 p.m., I’d pray in church. It was something I needed and wanted to do,” Danan, who is also an officer in an INC church in Quezon City, said in a phone interview.

Danan got more than what she prayed for.

She not only passed the exam but also topped it, sharing the No. 1 spot with Dio.

Danan recalled how she had to skip some questions in the exam and return to them later because at first glance, she was “unsure what the answers were to them.”

“And when I passed my papers, I even cried. That’s why I think the proctor already knows me,” she said with a laugh.

For Danan, hard work and willingness to sacrifice were very important.

Danan’s parents—Marianita and Jimmy—are both working overseas. Marianita is a caregiver in Canada and Jimmy is a businessman based in Saudi Arabia.

Danan narrated how she immediately enrolled in a review center in Quezon City after her graduation and attended classes there until June.

From July to September, instead of relaxing, she conducted a “self-review” of the concepts she learned in college while staying in a rented house with her brother Kevin, sister Kathrein Jen and two aunts.

“After that, until November, I attended review classes again,” she said.

Danan has no clear-cut plans as of now.

She said she wants to pursue a course in medicine or avail of a scholarship. If this was not possible, she said she would work instead as a nurse in a hospital.

Abroad or in the Philippines?

“I hope it’s here in the Philippines. If there’s an opportunity here so I can stay with (my relatives), I’ll really grab it,” she said.