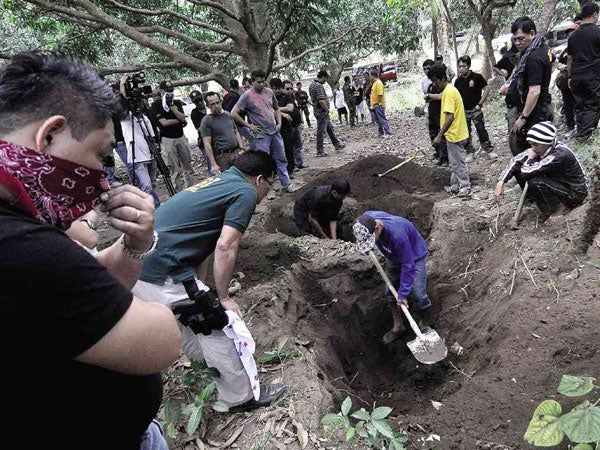 MASS GRAVE IN BATANGAS Workers dig a site in Sitio Loob Lumbang Calzada in Calaca, Batangas province, where victims of a gun-for-hire syndicate are believed buried. The syndicate is said to do hit jobs for land buyers and politicians. RICHARD A. REYES

MANILA, Philippines—The National Bureau of Investigation on Wednesday raided eight houses in Batangas believed to be the safehouses of a gun-for-hire gang doing hits for land buyers and politicians. Seven people were arrested, including a policeman.

The suspected gang leader, a woman, eluded capture. Guns and ammunition were seized.

The NBI agents had secured search warrants after a self-confessed gang member, a former Nasugbu councilor and defeated mayoral candidate, executed a sworn statement detailing what he knew of the gang’s activities and pinpointing an area in Calaca where murder victims were buried.

The informant claimed his own sister was the head of the group of hired killers, which charged P50,000 to P150,000 per hit.

“We talk to our clients face to face in restaurants where they tell us who they want us to take out,” according to the 29-year old informant.

Virgilio Mendez, deputy director for regional services, told the Inquirer that the witness had approached the Commission on Human Rights last year. He was referred to Justice Secretary Leila de Lima, who asked the NBI to look into his claims.

“We validated some of his statements so we applied for a search warrant,” Mendez said.

A source in the NBI said the informant had claimed “that among their targets were witnesses of murder cases.” They also allegedly killed small landowners who refused to sell their land to some buyers.

The informant told the Inquirer he decided to seek the help of the authorities because he feared for his life and that of his family.

He alleged that his sister, identified as Guillerma Limpoc of Barangay (village) Papaya, Nasugbu, Batangas, “is the head, contractor and financier of the gun-for-hire group in Batangas.”

“She is the seventh in our family of 12. I am the youngest. My other siblings also knew of her activities but were afraid of her because she had people working for her that would do her biddings,” the witness told Inquirer in an interview on Wednesday.

“She has no business or regular employment but she gets money as the contractor and financier of the group,” the witness alleged.

“I have participated in three executions and received a share of the payment,” he confessed.

The informant described his sister as “a ruthless person and a gambling habitué. “That’s why she always needs money.”

He explained their modus operandi as three-man team: “We do not tail our target, another member is in charge of that; after we receive a text from the spotter of the target’s presence we go and execute, then leave.”

2 cops, 4 others nabbed for drugs