After Binay row, a change of Dasmariñas Village guards 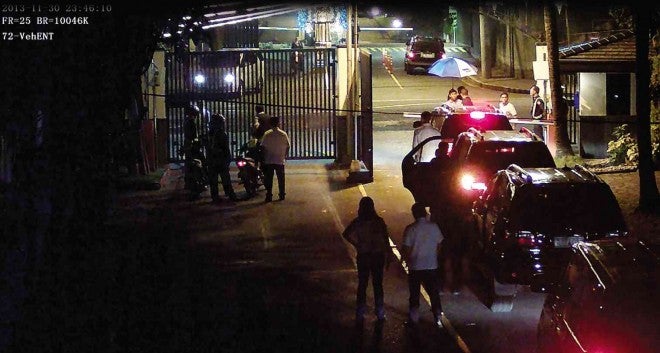 REMEMBER THE UMBRELLA? A video grab from a security camera in Dasmariñas Village captured the Nov. 30 incident that started it all.

Citing loss of confidence, officials of the homeowners’ association of Dasmariñas Village in Makati City have replaced the agency in charge of security, almost a month after the Inquirer reported how its members figured in an incident with Mayor Jejomar Erwin Binay Jr. on Nov. 30 last year.

The letter signed by DVA president Jay Pantangco said the board’s decision stemmed from its loss of confidence in the security firm over the way it handled the incident in the media.

Securing a video clip of the incident, the Inquirer earlier reported the arrest of three Right Eight guards after they refused to allow Binay’s four-car convoy to pass through a restricted gate close to midnight on Nov. 30.

The guards were later freed. The Binay camp maintained, however, that the guards volunteered to go to the police station.

The board said Right Eight made an unauthorized and inaccurate representation of the DVA to the media in connection with the incident. The agency also made it appear that VIPs, particularly the President and Vice President of the Philippines, were exempted from DVA’s policies, it added.

The DVA office, however, told Inquirer.net that the three Right Eight security guards who figured in the incident may still be “retained” by the association if they want to. INQUIRER.net