Blogger in disqualification case vs Reyes fears for his life 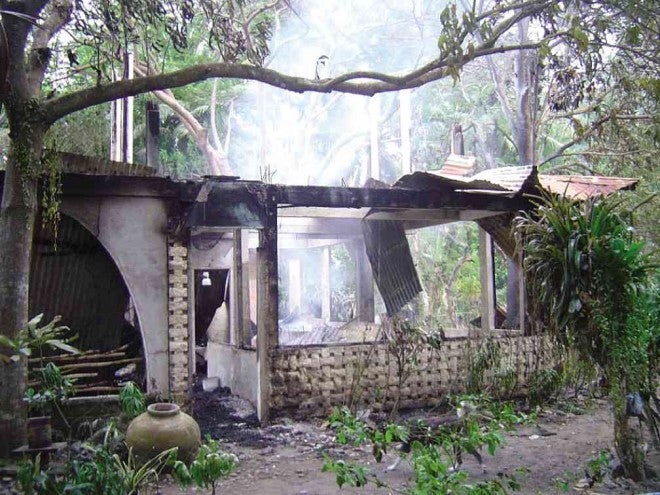 THE HOUSE of blogger Eliseo Obligacion, or what was left of it, after a fire broke out following an unsuccessful attempt by an unidentified man to break into it CONTRIBUTED PHOTO

SAN PEDRO CITY—The author of an online article that was used to question the eligibility of Regina Ongsiako Reyes as candidate for Marinduque representative started to fear for his safety after losing his house to a fire just days after an intruder barged into his home.

Eliseo Obligacion, a 62-year-old blogger, lost his home, a two-story house by the beach in Barangay (village) Amoingon to a fire on Sunday evening.

Prior to this, an unidentified man barged into his house on Saturday evening, Obligacion said.

The intruder rushed out without hurting Obligacion’s caretaker and her two granddaughters upon realizing the house was not empty, he said.

Boac fire chief Senior Fire Officer 3 Felix Echaveria, in a phone interview on Tuesday, said a joint investigation by the fire bureau and the local police would determine if the fire that started in Obligacion’s room was deliberate.

Echaveria said the case was complicated given the claims of a prior intrusion.

Obligacion, who owns the blog Marinduque Rising and a former tourism consultant of Reyes’ rival Lord Allan Jay Velasco, said he lived in that house for 22 years but recently moved elsewhere when he felt that Marinduque “has become a very dangerous” place for him to live in.

In January 2013, Obligacion wrote an article titled “Seeking and finding the truth about Regina Reyes,” that presented a database of Reyes’ immigration records as an American citizen and holder of a US passport since 2005.

The blog was used as evidence to support the petition of a certain Joseph Socorro Tan from Torrijos, Marinduque, that paved the way for the Commission on Elections (Comelec) to cancel Reyes’ candidacy in the May 2013 elections.

Reyes, a daughter of Marinduque Gov. Carmencita Reyes, appealed the Comelec ruling to the Supreme Court and claimed the case was under the jurisdiction of the House of Representatives Election Tribunal (HRET).

Amid the controversy, Reyes, a member of the ruling Liberal Party, was proclaimed by a local Comelec tally body as the winner against Velasco.

She was also recognized as a member of Congress despite a Supreme Court ruling that upheld her disqualification.

In a text message on Tuesday, Reyes denied any hand in the fire and attack on Obligacion.

“It is not in our character and I pray for Mr. Obligacion’s enlightenment,” she said.

Read Next
Customs urged not to release 1,000 container vans of rice
EDITORS' PICK
4 essentials for overcoming data protection challenges in the New Normal
294 areas in NCR under granular lockdown — PNP
Smart reaffirms 5G leadership as PH’s most reliable 5G mobile operator
Pharmally’s Mago no longer in her condo unit — Gordon
Huawei’s relentless mission to bring ultimate health and wellness tracking for your fitness goals
Gordon to Pharmally’s Mago: Show up or be a fugitive
MOST READ
Pharmally’s Mago no longer in her condo unit — Gordon
Senators secure Pharmally exec offering to turn witness
Guimbal, Iloilo Mayor Oscar Garin passes away
Bong Go says he is not seeking presidency in 2022
Don't miss out on the latest news and information.