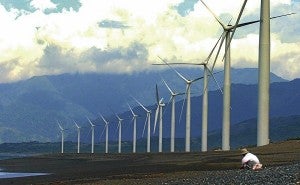 BANGUI, Ilocos Norte—The first and largest wind farm in the country located by Bangui Bay here is not just a popular tourist destination, it is also a haven for endangered sea turtles that lay their eggs on the shore.

Mauro Balualua, 45, of Barangay (village) Baruyen here, said that on Jan. 9 he saw a hawksbill sea turtle (Eretmochelys imbricata) crawl toward the shoreline and dig a hole to lay its eggs.

Balualua said this was the second time since December that a sea turtle lay its eggs between the turbines’ posts. He said he found a nest with at least 150 sea turtle eggs in it.

By Jan. 19, he said, local residents will witness the hatching of the first set of more than 100 hawksbill sea turtle eggs that were laid on Dec. 19.

Balualua said he had learned about the nesting habits of sea turtles here since he grew up observing them.

He admitted that he used to gather turtle eggs and eat them but he had since stopped.

Balualua said he was now aware that sea turtles were an endangered species and must be protected.

The Northwind Development Corp., the firm operating the wind farm and which holds a lease within the foreshore area, has commissioned Balualua to watch over the sea turtle eggs within their hatching period, or at least two months after the nesting date, to protect them from predators and poachers.

Local environment officials have been monitoring the stretch of Ilocos Norte’s shoreline from Badoc to Pagudpud towns for sea turtle nesting areas.

The provincial fishery division of the Ilocos Norte government and local government units have included in their information campaigns the conservation and protection of this endangered species.

The International Union for the Conservation of Nature classifies the hawksbill sea turtle as a critically endangered species. This species is scattered around the world, but is often seen in the Atlantic and Pacific regions. While this turtle lives part of its life in the open ocean, it spends more time in shallow lagoons and coral reefs.

Illegal fishing practices have threatened endangered sea turtles, whose shells are used as decorative materials. The Convention on International Trade in Endangered Species of Wild Fauna and Flora outlaws the capture and trade in hawksbill sea turtles and the products derived from them.