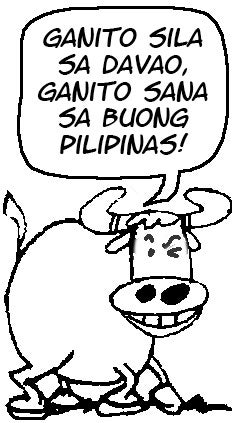 DAVAO CITY—Not even a former mayor could escape a speed gun.

Using the newly acquired device to measure the speed of a passing vehicle, traffic enforcers caught former Mayor Sara Duterte-Carpio exceeding the speed limit at 9:40 a.m. on Monday as she drove her Subaru along Quimpo Boulevard here.

Supt. Rhodelio Poliquit, chief of the Traffic Management Council (TMC), said the former mayor’s speed reached 57 kilometers per hour—above the 40-kph speed limit in the downtown area of the city.

The order sets the speed limits of vehicles in the city to protect pedestrians and passengers from reckless and abusive drivers.

According to the City Information Office, the former mayor’s apprehension only proved that in Davao City, no one was “above the law.”

Poliquit said his office had already forwarded the younger Duterte’s driver’s license to the Land Transportation Office, which would determine the penalty to be imposed on her.

Under the law, reckless driving fetches a fine of P1,278.

The former mayor reportedly paid the fine promptly, allowing her to win her license back.

The apprehension of the mayor’s daughter followed reports that some people had been heard complaining about the slow pace of life in Davao.

The mayor had repeatedly said the speed limit was aimed at protecting lives.

Last year, the older Duterte said he was enraged to see schoolchildren crossing the streets of Davao and looking as if they “were running for their lives” because of the speeding vehicles driven by people who refused to honor school and pedestrian signs.

Earlier, road accidents involving jeepney drivers prompted Duterte to gather all public utility drivers and operators, and to lecture them about the responsibility of drivers.

The mayor also issued EO 39 setting the speed limits of vehicles at 40 kph in crowded downtown streets and up to 60 kph along the highway.

After her first term as mayor, she refused suggestions from her father’s party, Hugpong sa Tawong Lungsod, to run as a congressional representative of the city’s first district.

“Sorry, I thought it was 60 kph along Quimpo (Boulevard),” the former mayor said, referring to the violation.

She said she saw the traffic aide as she was driving “but I did not slow down because I was confident the speed limit was 60 kph.”

The former mayor said she learned a valuable lesson from the incident and the lesson was, “Know your law.”