Lessons from the Christchurch quake 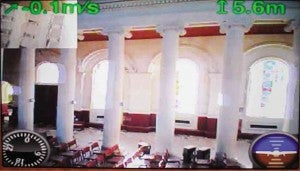 A PHOTO of the cathedral’s interior taken by a drone to determine damage.

“Looks as if it had been hit by an atom bomb!” said our taxi driver as my family and I wound our way in December through the cratered former business district of Christchurch.

In February 2011, a 6.3-magnitude earthquake struck the city, New Zealand’s second most populated.

The region had suffered a 7.1-magnitude quake in September 2010. Although there were no casualties, the tremor weakened buildings and structures.

When the 2011 quake hit, it became the second deadliest natural disaster in the country’s history. A total of 185 people from 20 countries, including nine Filipinos, were killed.

Within two hours of the quake, an emergency management system was installed in the Christchurch Art Gallery. The National Crisis Management Center in Wellington coordinated 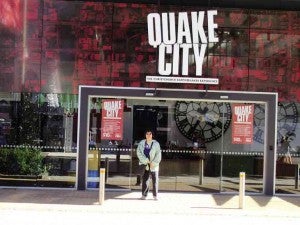 The author in front of Quake City, a museum that educates people about earthquakes.

national and international relief efforts. Wellington is the nation’s capital and home to Weta Workshop, which did the special effects for the “The Lord of the Rings” and “The Hobbit” movies.

Government response was immediate, with one minister’s regular tasks distributed among his colleagues, so he could focus entirely on quake management. Prime Minister John Key frequently visited Christchurch to support Mayor Bob Parker, who rallied the city to recovery.

An international aid member, involved in other countries’ rescue efforts, said that New Zealand’s was the “best organized” of all. 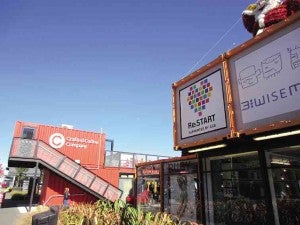 Cranes and bulldozers now dominate the city, since 80 percent of the buildings, including hotels and banks, are being demolished. Businesses, as well as around 10,000 residents, have migrated to the suburbs.

They have also been converted into cafés, restaurants, stores.

We wandered around Re:START Mall, as people withdrew funds from ATMs in a blue shipping container while others sipped lattes in a glass-covered red one or  shopped for shoes in a green-fronted one.

Re:START was supposed to operate for just six months, but it is still in high gear today, three years post-quake. Bars built from buses have suitcases for chairs.

The city’s damaged iconic cathedral was replaced by the Cardboard Cathedral (yes, made of strong cardboard to last 50 years), designed by a Japanese architect. 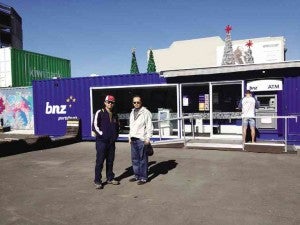 THE PORTABLE bank in the background is made of shipping containers.

The earthquake has also become a tourist attraction. “Civilization exists by geological consent,” said American historian Will Durant, “subject to change without notice.”

This quote greeted us at the entrance to Quake City, a museum dedicated to the science and art of earthquakes. It features  volcanic liquefaction exhibits, cartoons satirizing the quake, commercial and university research into quake-proof structures.

On show are devices that measure seismic waves to test the stability of buildings; drones controlled by iPads that can fly inside unstable structures so humans are not put at risk; houses built on flexible bearings that move with quakes, working like car suspension that allow travel over rough ground without getting thrown around; and laminated timber that allows walls and frames to rock during quakes or strong winds and return to normal afterward.

The University of Canterbury is at the forefront of earthquake research, with 200 studies now conducted in every department, from engineering to social sciences.

Our taxi driver said, “Calamities are part of life. But we are rebuilding. Structures will be safer, people will be more prepared.”

Turning to us, he asked, “You also had a huge quake recently, didn’t you? And typhoons, floods? Now you have a chance to rebuild.”