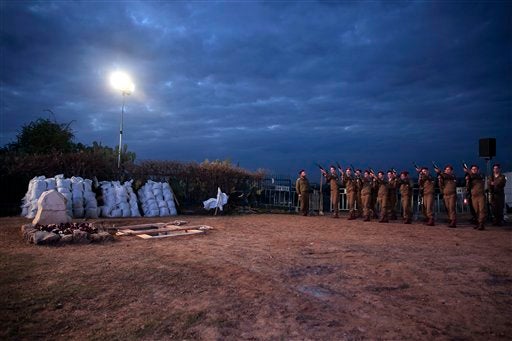 Israeli soldiers from a paratroopers unit rehearse at the grave site for late Israeli Prime Minister Ariel Sharon, who will be buried next to his wife, outside his ranch in Havat Hashikmim, southern Israel, Sunday. AP

JERUSALEM—Israel’s army says two rockets were fired from the Gaza Strip just hours ahead of Ariel Sharon’s funeral but they did not appear to have landed in Israel.

The location in southern Israel where former Israeli Prime Minister Sharon is to be buried later Monday is within range of rockets from the Palestinian territory and rockets in the past have hit the area.

The military says Monday’s rocket fire caused no injuries or damage. Israeli media said the rockets were fired into the sea.

Media in Israel also say the Iron Dome anti-missile system has been deployed near Sharon’s ranch in southern Israel to protect against rockets during the funeral. The military declined to comment.

Major events in the life of Ariel Sharon