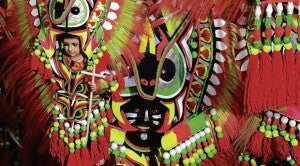 Ati-Atihan festival in Kalibo, Aklan: the merriest of them all.  FILE PHOTO/HARESH TANODRA (CONTRIBUTOR)

ILOILO CITY, Philippines—Supertyphoon “Yolanda,” which pummeled Iloilo and Aklan, among other provinces, in November, has failed to dampen preparations for the Ati-Atihan festival in Kalibo and the Dinagyang in Iloilo City which are held in January in honor of the Holy Child Jesus.

The tribes will vie for P704,000 in prizes in five categories, according to Lalaine Nam-ay of the Kalibo Sto. Niño Ati-Atihan Foundation Inc. (Kasafi).

The number of participating tribes this year is fewer than the 30 that joined the festival last year. Some of the tribes backed out due to financial constraints. Some lost their costumes to the supertyphoon, according to Nam-ay.

Yolanda destroyed many houses and other structures in Aklan.

Hotels in Kalibo and neighboring towns are fully booked. Many guests will stay in local homes, according to Nam-ay.

Aside from the contests, the Kalibo Ati-Atihan is also famous for its spontaneous street dancing. Revelers freely dance with the competing tribes whose members are representatives of private companies, families, barangays (villages), towns and schools.

The Ati-Atihan is considered the merriest among the Sto. Niño festivals, which include Iloilo’s Dinagyang on Jan. 26, and Cebu’s Sinulog on Jan. 19.

The Ati-Atihan traces its roots to the 13th century as a pagan ritual of the Aeta people. In the 18th century, it was transformed into a Christian celebration of the baptism of 1,000 inhabitants of Kalibo by a Spanish priest.

The name of the town is said to have been derived from “Isa ka Libo,” referring to those first baptized.

Organizers of Iloilo City’s Dinagyang festival also expect thousands of tourists for the weeklong festivities peaking on Jan. 25 and 26.

Jimena said the Kasadyahan festival will not be a competition of performances like last year because of the limited budget for prizes.

He said groups joining the Kasadyahan, which come mostly from Iloilo and other provinces, have asked for bigger subsidies due to the  impact of the typhoon.

The northern towns of Iloilo were also hit hard by the supertyphoon along with northern Antique and Capiz.

Tribes in the Ati contest will receive P320,000 from the Iloilo  Dinagyang Foundation Inc. The Kasadyan participants will also get P250,000  each.

Read Next
Agriculture official named by Benhur Luy back on the job
EDITORS' PICK
UK’s Boris Johnson will resign, BBC reports
Unemployment rate up to 6% in May
Geek out at TOYCON 2022 powered by Smart Signature
High inflation: Your P1 is now worth only 87 centavos
High-risk pregnancy: Reducing your risk is in your hands
House energy committee chair Arroyo bats for cheap electricity
MOST READ
Suspect in grisly killing of missing woman in Bulacan arrested
Kim Atienza’s daughter flaunts bikini body in response to critics of her ‘revealing photos’
Japanese artist who created ‘Yu-Gi-Oh!’ found dead in the sea
UK PM quits as Conservative leader
Don't miss out on the latest news and information.