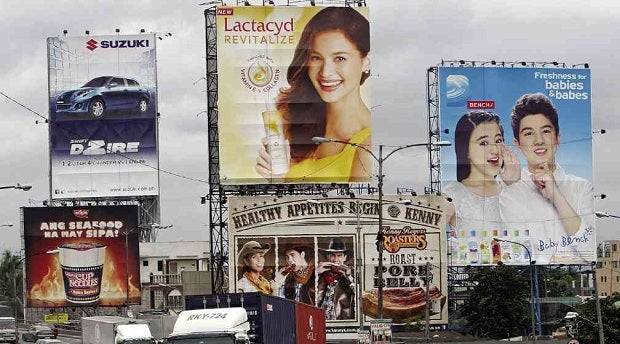 THERE will be less and less of these road “distractions” under the proposed master plan on outdoor ads in Makati City. RAFFY LERMA

Billboard owners, contractors and advertisers in Makati City have been asked to comment on the draft 10-year master plan presented by City Hall last year to regulate outdoor advertising and prevent this industry from becoming a source of eyesores and safety hazards.

Among the provisions in the plan is a ban on billboard or electronic display within 50 meters from the outermost portion of all interchanges or right of way of all underpasses, bridges, transport stations, terminals or similar structures. It also proposes a ban on billboards right on top buildings.

Natural formations like rocks, hills and tree-lined areas should also be free of those towering ads.

Ad displays will also not be allowed in places that could block emergency exits, fire escapes or other openings of all buildings in the city.

“Using them to wrap buildings shall also be prohibited, particularly on all types of residential and office buildings, and above-grade parking buildings where exhaust venting may be severely compromised, and where occupants may be deprived of natural light, ventilation and view,” the city government said in a statement.

Only six signs or ad materials will be allowed per building under the proposed plan to prevent clutter.

Temporary signs like banners and posters mounted on existing posts, fences or buildings shall be required to show a date of expiry, with a maximum of 30 calendar days, although the display period may be renewable.

Charged to the owner

The plan also calls for the removal of temporary signages at the expense of the owner. If it is removed by the city government, the cost will be charged to the owner.

The city government said the restriction on roadside billboards, for example, was meant to keep intersections free of visual distractions on the road that can cause accidents.

Around 180 industry representatives attended a public hearing on the plan on Dec. 16 last year.

They aired concerns such as the maximum number of signs or billboards that can be allowed per building, the basis for the charges and fees, and the ban near intersections.

In a 2004 ordinance, the Makati City government imposed a moratorium on the construction of new billboards and signs to avoid accidents particularly during typhoons.

Last year, the Metropolitan Manila Development Authority also created a Magna Carta on Outdoor Media that imposes limits on the size and height of billboards on major thoroughfares.