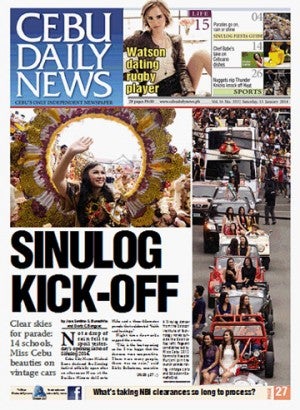 Not a drop of rain fell to spoil yesterday’s opening salvo of Sinulog 2014.

“This is the best opening so far. I was happy that the dancers were cooperative. There were many people, there was no rain,” said Ricky Ballesteros, executive director, who said he had prayed hard in church for fair weather.

The opening ceremony sets the tone for the nine-day stretch, leading up to the grand parade on January 19, he said.

Msgr. Roberto Alesna, in his homily, asked devotees to hold on to their faith amidst the calamities of 2013, after surviving the earthquake and typhoon Yolanda.

“Faith is a fragile thing but we must not be surprised when doubts arise within us. God will always understand the doubts,” he said, echoing Pope Francis’ advice to Filipinos dazed after supertyphoon Yolanda “Don’t be afraid to ask God why.”

Alesna said that fear and doubt is a normal reaction when one is faced with trials “but we can’t allow fear to cripple us and not move on.”

“Courage is not being unafraid. Courage is being afraid and going on despite our fears,” he said.

At the Mass, Rama and Gov. Hilario Davide III led the offertory procession, and later joined other officials of the Sinulog Foundation Inc. in the customary distribution of cash envelopes to candle vendors of the Basilica.

The vendors, mostly women, continue the tradition of offering the sinulog as a prayer-dance to the Sto. Niño at the basilica.

At the head of the parade were city officials followed by Miss Cebu 2014 pageant candidates, who waved to passers-by as they rode atop vintage sports cars.

Miss Cebu 2013 Namrata Neesha Murjani and her first runner-up were part of the beauty entourage.

Dance troupes from 13 universities in Cebu and the Visayas State University of Baybay, Leyte province joined the parade from the Basilica to Fuente Osmeña and back to the Cebu City sports complex.

As a finale, 300 high school students from the USC-North Campus performed a free interpretation of the Sinulog dressed in body suits with yellow and gold accents.

The opening salvo drew 65,000 people, including the 35,000 gathered at the Basilica and its environs, said Chief Insp. Wildemar Tiu of the Waterfront Police Station.