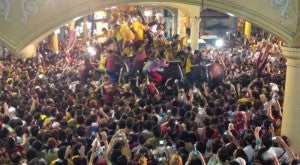 The Black Nazarene as it made its way towards Quiapo Church. INQUIRER.net

MANILA, Philippines — Pollution watchdog EcoWaste Coalition on lauded the efforts of the “Green Brigade” of volunteers who worked to clean up the heaps of garbage left by thousands of devotees of the Black Nazarene on the streets of Manila in Thursday’s feast.

At the same time, the group lamented that many of the devotees chose to ignore the constant plea from the organizers to keep Luneta and the processional trail litter-free.

A sign put up by the Quiapo Church reminding the participants to dispose of their garbage properly “obviously fell on deaf ears,” EcoWaste said.

But the group commended the Green Brigade volunteers who immediately picked up the trash left by devotees who attended the mass led by Manila Archbishop Luis Antonio Cardinal Tagle in the morning at the Quirino Grandstand.

Organized by the Quiapo Church, the Green Brigade is composed of volunteers from the Nazarene Catholic School, Philippine College of Criminology, Sta. Isabel College, the Kongreso ng Pagkakaisa ng Maralitang Lungsod, EcoWaste, and other groups.

“We salute them for their volunteerism that we hope would rub off on others,” said Aileen Lucero, national coordinator of EcoWaste.

“Next time, devotees should be more environmentally caring, exert every effort to prevent and reduce trash and not depend on others to clean up their mess,” she added.

“We remain hopeful that future celebrations of the feast of the Black Nazarene will be devoid of garbage and other excesses,” she said.

EcoWaste also lauded the unorganized waste pickers who patiently retrieved recyclable discards such as PET bottles to be sold to junk shops.

Aside from plastic bottles, some of the most littered items found at the Quirino Grandstand and the open field were cigarette butts, food leftovers, food wrappers, plastic and paper bags, polystyrene beverage cups, food containers, soiled carton boxes and newspapers, the group said.