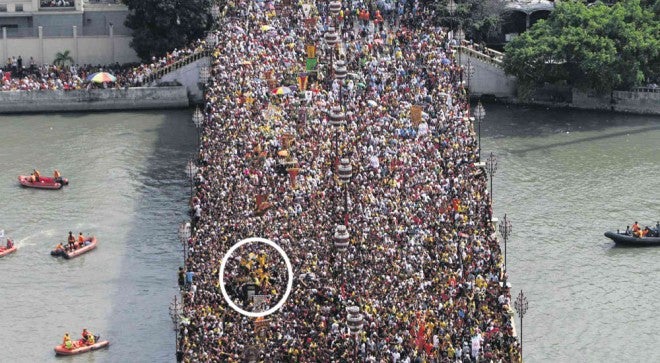 FAITH AND PASSION Tens of thousands of devotees follow the Black Nazarene statue (in circle) as the procession crosses Jones Bridge in Manila on Thursday. RICHARD REYES

Jaime Aquino, a 63-year-old stroke survivor, limped his way through the thick, jostling crowd to approach a replica of the statue of the Black Nazarene to touch it.

He did not have the strength to follow the main procession that carried the centuries-old, original statue of the Black Nazarene, but spending what strength he had left to touch a reproduction of it, he said, was his way of showing gratitude for the cure of his and his family’s illnesses in the past.

Aquino was accompanied by his wife, Marjorie, who said she had been cured of breast cancer and, like her husband, attributed the cure to the statue.

Like the Aquinos, an estimated 3 million other barefoot Catholics on Thursday defied physical infirmities and natural difficulties, including the heat of the sun, to fulfill their devotion to the ebony statue of Jesus Christ, crowned with thorns and bearing a cross, and carry it in the “traslacion,” one of the world’s biggest religious processions.

Schools along the 6.4-kilometer route of the procession declared a holiday and hundreds of thousands of male and female devotees began to battle for position at dawn to get near the Black Nazarene statue, which they believed had miraculous powers.

The Philippine National Police deployed 6,000 policemen to secure the daylong procession, an annual security nightmare due to the presence of Muslim extremists and widespread crime in the country.

The security included police snipers who perched on rooftops of buildings along the route of the procession. 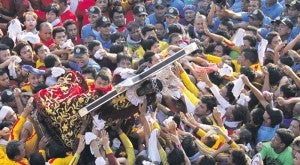 SAVING THE SAVIOR Devotees react to stop the tilting Black Nazarene statue from falling as it is placed on a carriage for the procession on Thurday. NIÑO JESUS ORBETA

They never had to go into action, but organizers said about 1,686 devotees fell ill or were injured, and one person suffered a potentially fatal stroke as the procession moved step by painful step from the Quirino Grandstand in Luneta Park to the statue’s shrine in Quiapo Church in the heart of Manila, following a longer route than last year.

This year, authorities closed McArthur Bridge over the Pasig River that had been found to have structural defects and feared might give way under the weight of thousands crossing it during the procession.

The procession had to take Jones Bridge down river to the west and go down to Sta. Cruz district through Escolta Street in Manila’s Chinatown before entering Quiapo district.

Nobody complained, although days before people were asking what the Department of Public Works and Highways had done about the defects of the bridge since they were found last year.

“This is my way of saying ‘Thank you’ to the Lord and asking him for safe delivery of my second child,” said heavily pregnant housewife Kaye Morales, 32.

“My eldest, a 13-year-old boy, met an accident last month and we believe it was the Nazarene’s help that he recovered quickly,” she said.

Seven months pregnant, Morales traveled to Manila from Bacoor town in Cavite province, just south of the capital, and queued for hours to kiss the feet of the Black Nazarene statue.

The life-size statue of Jesus was brought to Manila by Augustinian priests from Mexico in 1607, decades after the start of Spanish colonial rule.

It was believed to have acquired its black color after it was partially burned when the Spanish galleon carrying it caught fire.

The annual feast commemorates the first procession that transferred the Black Nazarene statue from a church in the walled city of Intramuros to Quiapo Church on Jan. 9, 1767.

Devotees swear by the statue’s miraculous powers, and believe that by joining the procession, barefoot to humble themselves, their prayers will be answered.

For Manila laborer Wilson Faculto, one such miracle happened just two months ago.

He and his wife, Marilyn, had been married for 15 years but could not have a child.

Five years ago the couple began joining the annual Black Nazarene procession, and in December, their prayers were answered.

“A woman we didn’t know gave us her baby for adoption, and walked away,” he said.

“This boy is our Nazarene miracle,” he said, as he cradled the 2-month-old baby in his arms.

Thousands of devotees had camped out in the park for two days to be among the first to touch the statue. They slept on the grass, unmindful of the foul smell from overflowing portable toilets nearby.

On Thursday, as dawn broke, the men prepared to brave the throng to wipe white handkerchiefs or towels on the statue. Many were teary eyed, and appeared in a trance.

“For a devotee, just touching the Nazarene makes all problems go away,” said Efren Delantar, a 42-year-old security guard.

Apart from asking for a bountiful year ahead for his family, Delantar also prayed for the souls of his relatives who were among thousands who perished when Supertyphoon “Yolanda” (international name: Haiyan) pounded central Philippines two months ago.

“They are no longer with us, but we are asking for special intercession for them,” he said. “I know that wish has been granted. They are all in heaven.”

In demonstrating their faith, overzealous devotees went out of control at the start of Thursday’s celebration, forcing the priests to cut short the early morning Mass at Quirino Grandstand.

Immediately after Manila Archbishop Luis Antonio Cardinal Tagle ended his homily at 6:30 a.m., devotees clad in maroon and gold T-shirts, the colors of the Black Nazarene, rushed the stage, breaking through the police barricade.

Some took over the platform being used by TV crews in front of the stage, while others climbed the stage to seize the statue and put it on the carriage to begin the procession.

Fr. Anton Pascual, manager of Church-run Radyo Veritas, grabbed the microphone and appealed to the devotees: “Please, be still. Let us finish the Mass.”

The devotees ignored him and proceeded to carry the statue to the carriage.

A priest said this was the first time he had seen devotees disrespect the Mass.

“They have lost respect,” the priest told reporters covering the Mass from the left end of the stage.

Tagle and other Church officials did not react as the devotees carried the statue away.

Church workers grabbed Mass articles to save them from the stampeding crowd, and Tagle and the other priests continued the Mass on the backstage, away from the raucous opening of the procession.

In his homily before the disruption of the Mass, Tagle spoke against corruption in the government and appealed for aid to the “forgotten” survivors of Yolanda in the Visayas, of Typhoon “Pablo” (international name: Bopha) in Tagum and Davao in December 2012, of the Moro insurgents’ attack on Zamboanga City last September and of the 7.2-magnitude earthquake that struck Central Visayas last October.

He urged Catholics to be ashamed of thievery and corruption.

Tagle spoke as the administration of President Aquino began to investigate allegations of corruption in the construction of bunkhouses for thousands of survivors of Yolanda who lost their homes when the powerful storm flattened entire communities in the Visayas last Nov. 8.

International aid agencies found the bunkhouses substandard, and reports were that they were overpriced, allegedly to facilitate kickbacks to politicians.

For a while, it was feared that the Black Nazarene, too, had become a victim of thievery, as the statue was seen without its crown as it was being transferred from the stage to the carriage.

Msgr. Clemente Ignacio, Quiapo Church rector, said he did not know whether the crown had been stolen or just fell during the frenzy.

But he said: “I’m sure it would be returned to the Nazarene. It happened in the past.”

True enough, about an hour into the procession, the crown was back on the statue’s head. It must have fallen as the statue tilted during the melee in the park, but was caught by someone and it had taken that long to put it back on the Nazarene’s head.

Trying to explain the devotees’ behavior, Ignacio said: “Their emotion was intense, perhaps because of poverty and what our country went through in the past year.”

Ignacio acknowledged the need to review the security measures for the feast, but dismissed suggestions to confine the procession to areas immediately around Quiapo Church, which could lead to many deaths because of the increasing number of people joining the annual event.

“At least we have a bigger space here at Quirino Grandstand,” Ignacio said.

Senior Supt. Joel Coronel, deputy director for operations of the Manila police, said the devotees’ behavior at the grandstand had been expected and that explained the deployment of 6,000 policemen to handle security.

But there were too many devotees who rushed to the stage, and they overpowered the police lines, Coronel said.

“Never was there an orderly (Black Nazarene) procession. It has always been disorderly, especially now that we have a bigger crowd.” he said.

Radio and television estimated the crowd at 3 million, but the Metro Manila police could not confirm that figure. But it estimated that about 200,000 were marching with the Nazarene as of 5 p.m. as the procession approached Quiapo district. There, at Plaza Miranda, about 55,000 people awaited the arrival of the Black Nazarene, the police said.

Church authorities said they expected 12 million people to come during the nine days of the Black Nazarene feast, but such figures were difficult to confirm.

One thing was certain, though. Thursday’s Black Nazarene procession was faster than last year’s 18 hours and the year before’s 22 hours. It was expected to reach Quiapo Church by midnight.—With reports from Tina G. Santos, Maricar B. Brizuela, AP and AFP