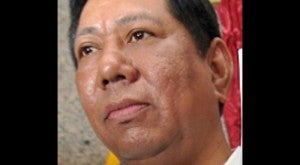 Caloocan Rep. Edgar Erice: Why could senators do it and not congressmen? PHOTO BY RICHARD REYES

Some members of the House of Representatives are grumbling about the realignment by nine senators of a total of P1.8 billion that used to be their pork barrel funds to certain projects in the 2014 national budget.

The House members specifically complained about the P200 million that Sen. Jinggoy Estrada had realigned as subsidy for three local governments, including Manila where his father is the mayor.

Caloocan Rep. Edgar Erice, a member of the ruling Liberal Party, said he and other lawmakers were “surprised” that the Priority Development Assistance Fund (PDAF) that the Supreme Court outlawed two months before the 2014 budget was approved could be diverted to the senators’ pet causes.

He said House leaders had told congressmen that realigning their PDAF to local government units (LGUs) was disallowed.

“I am a member of the House appropriations committee and our chair told us that we could not allocate our PDAF to our respective LGUs. Otherwise, I could have realigned my scrapped PDAF to Caloocan City. Why could senators do it and not congressmen? There should be uniform treatment,” Erice said in a phone interview.

Members of the House were allotted P70 million each in PDAF and each senator, P200 million before the high court declared the lump-sum allocation for lawmakers’ pet projects unconstitutional in the wake of public outrage over the P10-billion pork barrel scam in which lawmakers were accused of pocketing huge sums.

Isabela Rep. Rodolfo Albano III, a member of the minority, said that representatives from both the majority and the minority blocs had griped about the unequal treatment on the allocation of pork.

“The ones complaining are actually the relatives of congressmen who are governors or mayors in their respective districts. They saw this as a missed opportunity to help their constituents,” Albano said.

He said the senators had insisted on these realignments on the bicameral conference committee that reconciled the budget versions of the House and the Senate.

“It was too late before we discovered that the realigned funds were placed in the LGU assistance fund.”

Of the nine, four senators—Estrada, Revilla, Lapid and Trillanes—chose to specify which agencies would get their pork while the other five—the Cayetano siblings, Ejercito, Recto and Santiago—realigned their pork to the calamity fund.

While Revilla, Lapid, and Trillanes gave their pork for public works, scholarships, police and military, and health services, only Estrada gave his pork to LGUs—P100 million to Manila where his father is the mayor; P50 million to Caloocan City where Mayor Oscar Malapitan is a political ally; and P50 million to Lal-lo, Cagayan province, where an airport is being built to serve the Cagayan Special Economic Zone.

Erice said that his colleagues initially thought that he was the one who inserted the P50 million for Caloocan City because he was close to the administration leaders.

He said he was still wondering about the basis for allowing Estrada to realign his pork to LGUs.

Erice noted that the House adopted a policy to realign P24.5 million out of the P70 million in PDAF previously allocated to each of them to the Department of Public Works and Highways, Department of Health, Department of Social Welfare and Development, Department of Labor and Employment, and Commission on Higher Education.

The projects to be funded by the P24.5 million were contained as line items in the national budget.

Erice said that while members of the House could endorse their constituents to apply for health benefits or scholarships in these agencies, there was no guarantee that they would be approved unlike before when each legislator had full control of where his pork would go.

“There will be competition for these benefits,” he said.

“I don’t know how the senators decided on their PDAF in their deliberations. But it should have been the same policy for both chambers,” he added.

Sen. Francis Escudero, chair of the Senate finance committee, said on Wednesday that all senators had agreed in a caucus “to respect what each senator wanted to do with the original PDAF allocation,” explaining the different modes taken by the senators in disposing of their pork barrel.

“The decision was not to put it to a vote, and to just let the senators decide, and be responsible for it,” he said.

Escudero said the manifestations of the nine senators were carried out as amendments since the Senate did not follow the original House budget measure that realigned P25.2 billion in PDAF, including the Senate’s portion, to five departments.

Navotas Rep. Tobias Tiangco said the lawmakers should not be criticized for realigning their pork because the President should have rejected them outright.

Tiangco doubted the legality of Budget Secretary Florencio Abad’s declaration that the realigned funds of the senators were still subject to a special release order from Malacañang.

“Once it is in the approved GAA (General Appropriations Act), impoundment by the executive by not releasing funding is illegal. What should have been legal was for the President to have vetoed the provisions he did not agree to. But once he signs the GAA, without a veto on any provision, the non-release of funds or impoundment is illegal,” Tiangco said in a text message.

Albano said that if the DBM insisted on giving its clearance before releasing the realigned funds, “this means that patronage politics still persists.”