103-yr-old among vets honored in Pangasinan 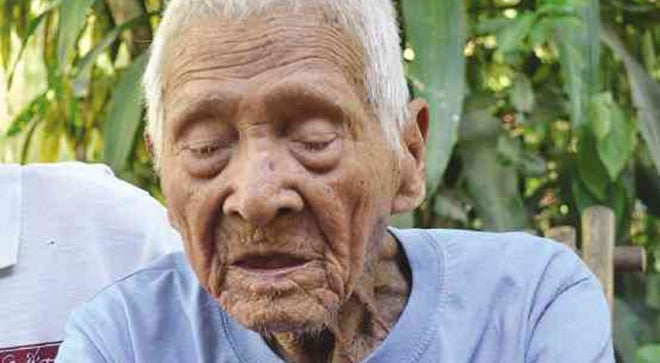 BONIFACIO Agacer, 103, is considered to be the oldest war veteran in Pangasinan. From fighting Japanese forces during the second world war, Agacer is now fighting poverty and a declining health as he says he wants to live to be 107 years old. CONTRIBUTED PHOTO

But this time, his fight is no longer against the Japanese Imperial Army that invaded the country in 1941 but against poverty and age that have slowly consumed him.

Agacer, the oldest of the 759 war veterans in Pangasinan, was honored along with other veterans, most of them aging and ailing, during the 7th Veterans’ Day celebration here on Thursday.

Agacer’s son, Mariano, 80, a farmer, said he wanted his father to attend the ceremony but he could no longer move without assistance.

Mariano and his sister, Jovita Baroga, 70, also a farmer, instead attended the event, where they received, on behalf of their father, an award for the “Oldest Surviving Veteran.”

Agacer also received a certificate for free lifetime medical and diagnostic care services from the Provincial Health Office, a P20,000 cash gift and plaques of recognition.

Mariano said his father, the only boy in a brood of four, joined the guerrilla movement when he was 33 after he was recruited by Col. Alfredo Balingao of neighboring Tayug town.

“He would tell us stories when we were children about his exploits during the war,” said Mariano.

He said his father was part of a team that destroyed a bridge in eastern Pangasinan to prevent Japanese soldiers from reaching the Caraballo Mountains, where the guerrilla fighters were hiding.

“He told us that he walked 12 kilometers barefoot to bring water and food supplies to the guerrilla camp,” Mariano said.

After the war, Agacer was conferred the rank of private by the Philippine Army and was recognized as a war hero. He continued farming in the village, which is at the foot of the Caraballo Mountains.

“There was a time when we received letters from the United States Embassy. But we understood nothing, so we just ignored them,” Mariano said, adding that his father finished only the fourth grade.

In 2000, Mariano said his father received a lump sum of P80,000 from the government. After that, he began receiving P6,700 in monthly pension, which was barely enough for his medical needs and daily subsistence.

“My sister and I are the ones taking care of him,” said Mariano.

Agacer has since lost his strength and has difficulty speaking and recognizing people, even his own children.