Woman, childless couple thank Nazarene for miracle in their lives 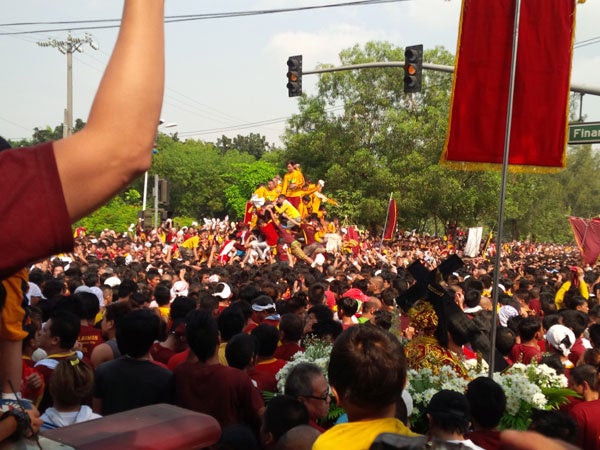 MANILA, Philippines – A pregnant woman whose son survived an accident, a childless couple who was gifted with a child were among the throng who joined this year’s procession of the Black Nazarene.

Considered one of the world’s biggest Catholic parades honouring an ebony statue of Jesus Christ who they believe has miraculous powers, schools declared a holiday and police went on full alert as thousands of male and female pilgrims battled for position at dawn to get near the Black Nazarene statue hours before the parade started.

“This is my way of saying ‘Thank You’ to the Lord and asking Him for safe delivery of my second child,” heavily pregnant housewife Kaye Morales, 32, told Agence France-Presse.

“My eldest, a 13-year-old boy, met an accident last month and we believe it was the Nazarene’s help that he recovered quickly,” she said.

Seven months pregnant, Morales travelled to Manila from Bacoor just south of the capital and queued for hours to kiss the feet of the statue.

Filipinos believe that the icon is miraculous and that by joining the procession, barefoot to humble themselves, their prayers will be answered. For Manila labourer Wilson Faculto, one such miracle happened just two months ago.

He and his wife, Marilyn, had been married for 15 years but could not have a child.
Five years ago the couple began joining the annual Black Nazarene procession, and in December, their prayers were answered.

“A woman we didn’t know gave us her baby for adoption, and walked away,” he said.

“This boy is our Nazarene miracle,” he said, as he cradled the two-month old baby in his arms.

Other members of the family had camped out in the park for two days to be among the first to touch the statue. They slept on the grass, unmindful of the foul smell from overflowing portable toilets nearby.

The men prepared to brave the throng to wipe white handkerchiefs on the statue. Many were teary eyed, and appeared in a trance.

“For a devotee, just touching the Nazarene makes all problems go away,” said Efren Delantar, a 42 year-old security guard.

Apart from asking for a bountiful year ahead for his family, Delantar also prayed for the souls of his relatives who were among thousands who perished when Super
Typhoon “Yolanda” (international name: Haiyan) pounded the central Philippines in November.

“They are no longer with us, but we are asking for special intercession for them,” he said.

“I know that wish has been granted. They are all in heaven.”

More than 80 percent of the Philippines’ 100 million population are Catholic, a legacy of four centuries of Spanish colonial rule, making it Asia’s main bastion of the faith.

The country is deeply religious, but Thursday’s annual march through Manila’s old quarter — the biggest religious event in the country — is an extreme form of veneration.

Many are injured and sometimes people die as devotees scramble over one another to get near the statue as it is borne from Luneta Park to its traditional home in the Quiapo church in a slow moving procession that takes an entire day.

The life-sized statue of Jesus was brought to Manila by Augustinian priests from Mexico in 1607, decades after the start of colonial rule.

It was believed to have acquired its black colour after it was partially burnt when the Spanish galleon carrying it caught fire.

The Black Nazarene of Quiapo